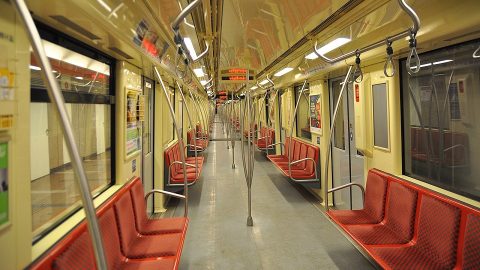 Kharkiv, the second-largest city in Ukraine, intends to introduce the new type of trains in its metro network. They will have an open gangway connection between the carriages. Currently, all three metro systems in Ukraine (in Kyiv, Kharkiv, Dnipro) use the trainsets with partitions and separate entrances to each carriage.

The Kharkiv city authorities plan to purchase eight five-carriage trainsets with an open gangway connection. “We are waiting for confirmation from the European Investment Bank for the purchase of new metro cars – eight trainsets. It is for the first time in Ukraine to acquire such kind of trainsets, without partitions between cars,” said Yevhen Vodovozov, the Deputy Mayor of Kharkiv for the city infrastructure. According to him, the first is expected to be delivered in a year and a half, while the entire order should be fulfilled in two or two and a half years.

The acquisition of the mentioned eight trains is just a beginning for Kharkiv Metro. In the coming years, the city authorities plan to purchase 17 five-carriage trains. This order will be financed by the European Bank for Reconstruction and Development (EBRD), European Investment Bank (EIB) and Kharkiv City Council.

The investment project includes the construction of the 3.5-kilometre extension of Oleksiivska Line. There will be built the Derzhavinska and Odeska metro stations and a new depot on the mentioned line. To this end, the investors will allocate 330 million euros: EIB and EBRD will loan 160 million euros each while the Kharkiv City Council will invest in the project 10 million euros.

The Kharkiv Metro network was launched in 1975. It consists of three lines with a total length of around 38.5 kilometres and 30 stations. The latest line, Oleksiivska, was opened in 1995. Initially, it had five stations. In the past two decades, the route received four more stations: two stations (Metrobudivnykiv, 23 Serpnia) in 2004 and two others in the 2010s (Oleksiivska, Peremoha). The Kharkiv Metro system is mostly served by the Soviet-made trains of type 81-717/714 or Russian-made units of type 81-718/719.

Peremoha was opened in 2016