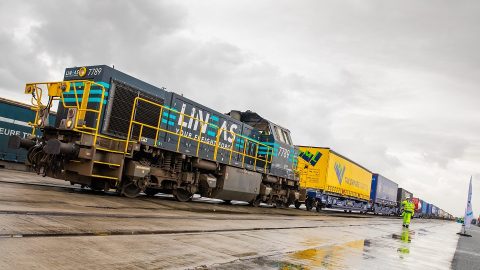 Lineas, the largest European private rail freight operator, plans to equip its 88 shunting locomotives of type HLR 77 with ETCS. The first retrofitted vehicle will be rolled out in the middle of 2024 while the entire project will be completed by the end of 2025.

The current stage includes the feasibility study for the ETCS installation. It is being performed by The Signalling Company, a joint venture of ERTMS Solutions, a Belgian supplier of railway systems, and Lineas, in a partnership with Transurb, the Brussels-based technology company. To this end, Transurb has installed a hardware benchmark frame with experimental ETCS components at one of the Lineas-owned locomotives. According to the project specifications, 88 vehicles will be also compatible with TBL1+ train protection system.

The shunting locomotives of type HLR 77 were produced by Vossloh Group at the Maschinenbau Kiel (MaK) plant in Kiel, Germany. This class is based on the shunters of the MaK G1200 series (G1201, G1202, etc.) being developed by German manufacturer MaK (afterwards, it became a part of Vossloh Group) since the 1970s. The vehicles of the mentioned classes run in several European countries including Germany, France, the Netherlands, Sweden, Norway. In Belgium, they are in operation since the first half of the 2000s. Currently, Lineas operates 110 units of type HLR 77. The Belgian rail freight company uses them for shunting operations and mainline services, mostly in multiple-unit train control.