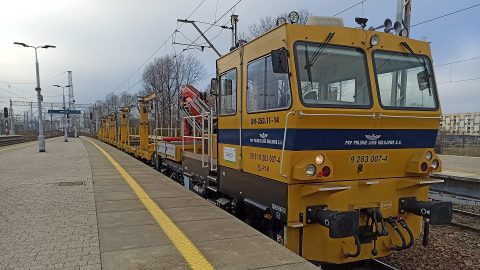 The investment programme of the Polish rail infrastructure manager PKP PLK is nearing completion. It is dedicated to the improvement of the company’s maintenance fleet. Moreover, PKP PLK is also focusing on the acquisition of rescue technical trains and road-rail vehicles.

During the last two years, PKP Polskie Linie Kolejowe (PKP PLK) has been gradually purchasing the track motorcars for the maintenance works on the Polish railway network. In the first quarter of 2020, it ordered the remaining six of 47 vehicles scheduled in the investment programme. Each track motorcar is equipped with a crane for unloading materials with an arm over 12 metres and a lifting capacity of nearly 1,600 kilogrammes as well as with a special platform of 11 square metres for carrying materials. The vehicles also have equipment for cleaning tracks in winter.

Six track motorcars will be delivered by Polish company Zakład Pojazdów Szynowych at a price of 21.5 million zlotys (more than 4.7 million euros). Currently, PKP PLK operates 28 of 47 ordered vehicles. They are based at the PKP PLK’s units in Białystok, Siedlce, Skarżysko-Kamienna, Wałbrzych, Ostrów Wielkopolski and Nowy Sącz. This investment programme is co-financed by the European Union from the Cohesion Fund under the Infrastructure and Environment Operational Programme.

Besides the track motorcars, PKP PLK is investing in rescue vehicles. In recent years, it purchased several batches of the technical rescue trains and road-rail vehicles. In the first quarter of 2020, Polish rail infrastructure manager introduced into service one technical rescue train of type WM15A/PRT and two rail-road vehicles. The former is dedicated for eliminating the effects of major accidents such as the trees fell on tracks while the latter is devoted to the minor issues.

As a result of the two-year investments, PKP PLK operates a fleet of eight rescue trains of type WM15A/PRT and 25 specialised rail-road vehicles. They support 18 specialised rescue teams of PKP PLK which are based at the largest railway junctions in Poland including Warsaw, Kraków, Bydgoszcz and others.