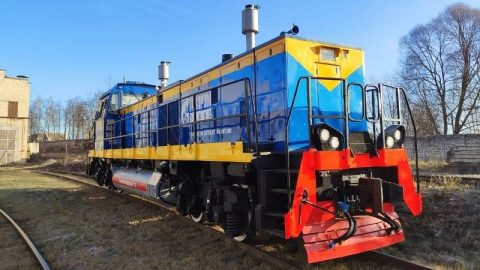 Lyudinovsky Diesel Locomotive Plant, a part of Sinara Group, is testing the new LNG-powered locomotive of type TEMG1. After completing the trials and certification, the vehicle will be delivered to Gazpromtrans, a subsidiary of Gazprom, for the regular shunting operations. Sinara Group is committed to producing 24 units of this type.

The new vehicle is being tested by the designers of Sinara’s Centre for Innovation Development and the engineers of Lyudinovsky Diesel Locomotive Plant. They are reviewing the operation and functionality of two gas engines with a total power of 856 kilowatts. According to the schedule, the LNG-powered vehicle should perform 300 hours of the test rides on the test ring of the Lyudinovsky Diesel Locomotive Plant.

The tests started at the end of December 2019 and will be completed by the end of the first quarter of 2020. After that, the locomotive will be certified for the operations on the Russian railway network and will be delivered to the customer. Gazpromtrans plans to use it on the Obskaya–Bovanenkovo line, the northernmost railway in the world.

As of today, there are three LNG-powered locomotives running in Russia. Two of them were developed by Sinara Group for the operations on the main lines. The first unit of the type GT1h was produced in 2007, while the second one of the same type was manufactured in 2013. The third LNG-powered locomotive was produced by Transmashholding in 2013. It belongs to the type TEM19 and is dedicated to the shunting operations.

The GT1h vehicle is capable to haul 16,000 tonnes of freight while the TEM19 vehicle has power enough to transport 10,900 tonnes of freight. Both units are being operated by Russian Railways (RZD) in Sverdlovsk Oblast. By 2023, RZD intends to increase its fleet of the LNG-powered locomotives from 3 to 22 units.