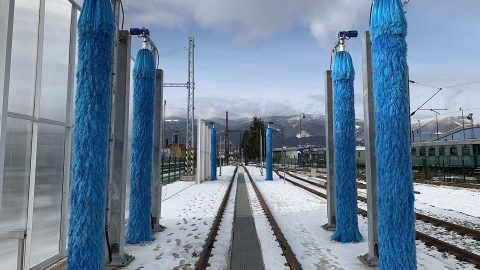 Slovak national railway operator ZSSK is finalising the modernisation of its oldest depot at the Vrútky junction, close to the city of Žilina. The project includes the installation of a new washing facility. ZSSK invested in the reconstruction of the Vrútky depot over 12 million euros from its own funds.

15 contractors were involved in the reconstruction of the 150-year-old train depot in Vrútky. They upgraded eight buildings with a total area of 3,380 square metres. One of the most significant project’s feature is the new washing facility, also known as the Centre for technical and hygienic maintenance of rail vehicles. It consists of a stable washer, a wastewater decay ramp, a filling station for fuel and AdBlue (a special liquid used for reducing the air pollution by the diesel engines).

Moreover, the modernisation works include the extension of the repair hall from 93 to 125 metres long. 20 new turnouts and over 2 kilometres of new tracks were installed at the depot within the project. Also, the contractors upgrade the office building for ZSSK staff. Now, it includes a hostel for 12 people, a modernised dining room for 120 people and the training rooms for 48 trainees. The Vrútky depot was equipped with a video surveillance system.

ZSSK or Železničná spoločnosť Slovensko is a state-owned company with a staff of about 6,000 employees. In 2019 it carried around 77.4 million passengers (the population of Slovakia is over 5.4 million people). The company is focused on regional and commuter train services. At the same time, only around 818,000 passengers took the company’s long-distance InterCity connections.

According to the current schedule, ZSSK offers an average of 1,538 trains a day, including 238 long-distance trains and 1,300 regional and suburban connections. The railway company stops at 719 stations and halts, it operates the internal routes with a total long 2,921 kilometres.