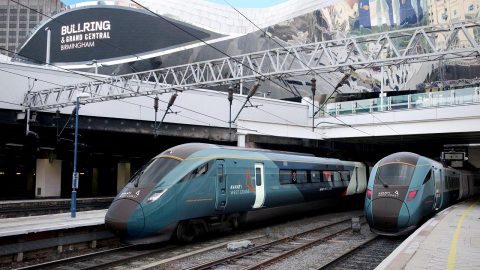 Hitachi Rail has been chosen as a rolling stock supplier for new UK railway operator Avanti West Coast. The manufacturer will deliver 13 bi-mode and 10 electric trains. They will be introduced on the UK railways starting from 2022.

Avanti West Coast, a joint venture of FirstGroup and Trenitalia, will start its operations on Sunday, 8th December. It plans to use the ordered electric trains on the intercity routes between London, the West Midlands and Liverpool. The bi-mode vehicles being able to use electric energy from the overhead wires and power of diesel engine will run on the line from London to North Wales. Most of this route is electrified, therefore, the bi-mode trains will be powered by electric energy predominantly. They will switch to diesel power only on some non-electrified sections such as on the North Wales Coast Line to/from Holyhead. Due to the high environmental standards of their diesel engines, the new trains are cleaner and more efficient than the trains they are replacing.

Hitachi Rail will produce 13 five-carriage bi-mode trains and 10 seven-carriage electric trains. The entire order includes 135 carriages and costs more than 350 million pounds (over 414 million euros). Each bi-mode vehicle has a seating capacity for 301 passengers while the electric vehicle contains 453 seated passengers. The seven-carriage version of the electric trains will have similar numbers of seats to a nine-carriage Pendolino, owing to the longer 26-metre carriages of the Hitachi trains.

Both types of Avanti West Coast trains are inspired by Japanese bullet trains. They are able to speed up to 200 kilometres per hour. The new trains will offer to the travellers free Wi-Fi network, at-seat wireless inductive charging for electronic devices, plug sockets and USB slots, a real-time passenger information system that can advise customers of connecting rail services. Hitachi Rail will manufacture the ordered units at its County Durham factory in north-east England. The vehicles will be maintained by a joint team from Hitachi and Alstom at the existing Oxley depot in Wolverhampton, supporting highly-skilled engineering jobs.