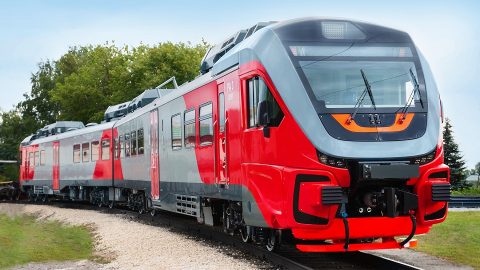 After introducing on the Sakhalin island network, the brand new railbuses of RA-3 type have started to run on the Briansk – Orel route. The latter provides connection between the administrative centres of Briansk and Orel regions of Russia. By the end of October, the RA-3 railbuses will add two other commuter lines in Briansk region to the geography of their routes.

RA-3 is a brand new type of railbuses produced by Metrovagonmash, a part of Transmashholding. The first vehicle of this type was assembled in February. In the same month, it was certified for the passenger transportation on Russian railway network. The RA-3 type was introduced into regular service on the island of Sakhalin on 30 August. Since that time, three two-car vehicles are running on three commuter routes of Sakhalin Passenger Company, a subsidiary of Russian Railways, in the souther part of the island: Yuzhno-Sakhalinsk – Tomari, Yuzhno-Sakhalinsk – Korsakov and Kholmsk – Tomari. In 2020 four more railbuses of RA-3 type will be supplied by Metrovagonmash to Sakhalin. The vehicles will replace the old Japanese diesel trains of type 2 produced by Fuji Heavy Industries in the mid-1980s.

To launch the new railbuses on the Sakhalin lines, Russian Railways is performing the big modernisation project. It is dedicated to converting the island railway network from 1,067 millimetres gauge that is common in the neighbouring Japan (the southern Sakhalin was under control of Japan between two world wars) to the Russian standard of 1,520 millimetres. The project started in 2003 and is expected to be finalised in 2020. It is worth 35 billion rubles (around 492 million euros) and includes modernisation of 865 kilometres of mainlines, 166 kilometres of spur and branch lines, installation of 390 railroad switches and upgrading of 70 bridges and tunnels.

After Sakhalin Passenger Company, Central Suburban Passenger Company (CSPC), the privately owned enterprise, has become the second railway operator to use the RA-3 railbuses. Since early September, the vehicles have been testing on various routes in Briansk and Orel regions. On 17 October the RA-3 railbuses started to run on the Briansk – Orel line. This route connects the cities of Briansk and Orel, the administrative centres of two regions with the same name. It is expected that the new trains will serve two other commuter routes in Briansk region until the end of October: from Briansk to Fayansovaya station and Komarichi station.

CSPC has already got seven two-car railbuses. According to the contract with Metrovagonmash, the railway operator will receive 10 two-car and one three-car trains by the year’s end. Other five three-car units will be supplied to CSPC in 2020. In total, Central Suburban Passenger Company will have a fleet of 23 railbuses (17 two-car and six three-car units).

The RA-3 railbus is diesel-powered, therefore, it is suitable for operations on the non-electrified short-distance routes. The vehicle was designed by TMH Engineering, a part of Transmashholding, and is assembling at the facilities of Metrovagonmash. To provide a better comfort for the passengers, the manufacturer has provided the RA-3 railbuses with improved interior, a passenger information system reporting the route and the train movements, video surveillance, air conditioning, energy-saving LED lighting. The vehicles are also equipped with the special lifts for the passengers with reduced mobility.

Metrovagonmash is producing the RA-3 railbuses in two- and three-car formation. The two-car vehicles have 133 seats, while the three-car units have 229 seats. The new railbuses are able to run in multiple-unit train control. As a result, the four- and six-car trainsets could be composed. The RA-3 railbuses can speed up 120 kilometres per hour. They have a 40-year lifespan.

Besides the RA-3 type, Metrovagonmash has more than 20 years of experience in manufacturing the railbuses. In 1997-2006 the company was assembling the RA-1 railbuses. Over 130 vehicles in one- and two-car formation have been produced in this period. This type is being operated mostly by Russian Railways in one-car formation. 40 two-car units were supplied to Hungary to run on the regional non-electrified routes. One two-car vehicle of RA-1 type has been running in Czechia in the mid-2000s. However, it was transferred to Hungary.

The second type developed by Metrovagonmash is RA-2 type. It was being produced in 2005-2015 in two-, three- and four-car formation. Metrovagonmash have manufactured over 110 units for this period. Most of these vehicles are running in Russia. Some vehicles were supplied to Lithuania, Ukraine and Mongolia. Also, 39 two-car railbuses of RA-2 type were delivered to Serbia. They are classified as ŽS 711 type.