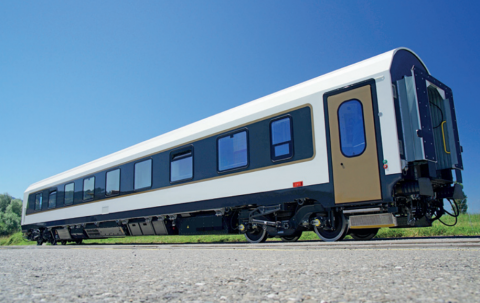 Azerbaijan to launch passenger train to Turkey in 2019

Azerbaijan Railways will launch a passenger service to Turkey in the third quarter of 2019. The new train will run on the Baku-Tbilisi-Kars railway, opened a year ago.

In an effort to expand the number of international trains, Azerbaijan Railways (ADY) will launch a new passenger service from Baku to Ankara and Istanbul in the third quarter of 2019. The new train will use the tracks of the Baku-Tbilisi-Kars railway, officially opened in October 2017. Currently, only the Turkish section of the line is used for passenger operations.

ADY will use the Stadler-made coaches for the new service. The first car was revealed in September 2016 at InnoTrans. Stadler will supply to Azerbaijan 30 coaches: 27 sleeping cars with different capacity (from 16 to 34 passengers) and 3 restaurant ones for 28 seats each. Due to the different gauges in Azerbaijan, Georgia, and Turkey (1520 and 1425 mm), the coaches will be equipped with gauge adjustable wheelsets. ADY will receive the first batch of 10 new railcars in the first quarter of 2019. Another two batches will be delivered later.

The international trains of Azerbaijan Railways run only to three countries – Georgia (Tbilisi), Russia (Moscow, Rostov-on-Don) and Ukraine (Kharkiv, Kyiv). The Baku – Tbilisi train rides every day while the other international services run only once or twice per week.