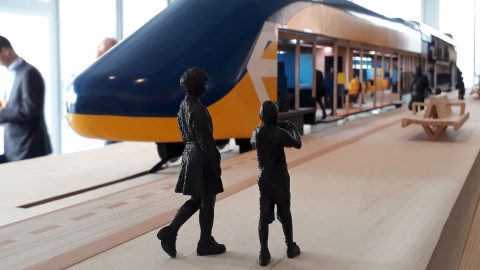 Dutch Railways (NS), architectural firm Mecanoo and project designer Gispen presented their vision on the train interior of the future on Thursday at the Innovation Expo in Rotterdam, Netherlands. The new design has a higher capacity, but the interior is mainly designed in a different way: based on the activities of train passengers.

“We’ve looked at all train designs up to now, from a hundred years ago to now,” says concept manager Sarah Schiffer from project designer Gispen. “We saw that the focus in recent years was mainly on capacity, not on comfort, but that is also part of the demand, but we have also looked at the experience of travellers.”

The aim of the new design was therefore to increase the capacity of each coach, but also to provide for travellers’ needs: do people want to look outside during their journey, or work? To answer these questions, NS conducted passenger surveys. “We wanted to know: what do people on the train do?” This resulted in six main activities, which are subdivided into three main areas. ”

The main zones are the relaxation zone, the concentration zone and the social zone. “The social zone is the place where people get in. Now it is a barren hall, it does not look very welcoming.” We have started to look: what does this space facilitate? Often people are here because they are only in the train for a short time, or they are standing with a big suitcase.”

To do this comfortably, so-called ‘stits’ have been placed in this part of the coach. ‘Stits’ represents a combination of standing and sitting. They are a kind of protruding cushions that are attached to the wall. These can already be found in the Stadler’s Flirt in the Netherlands. 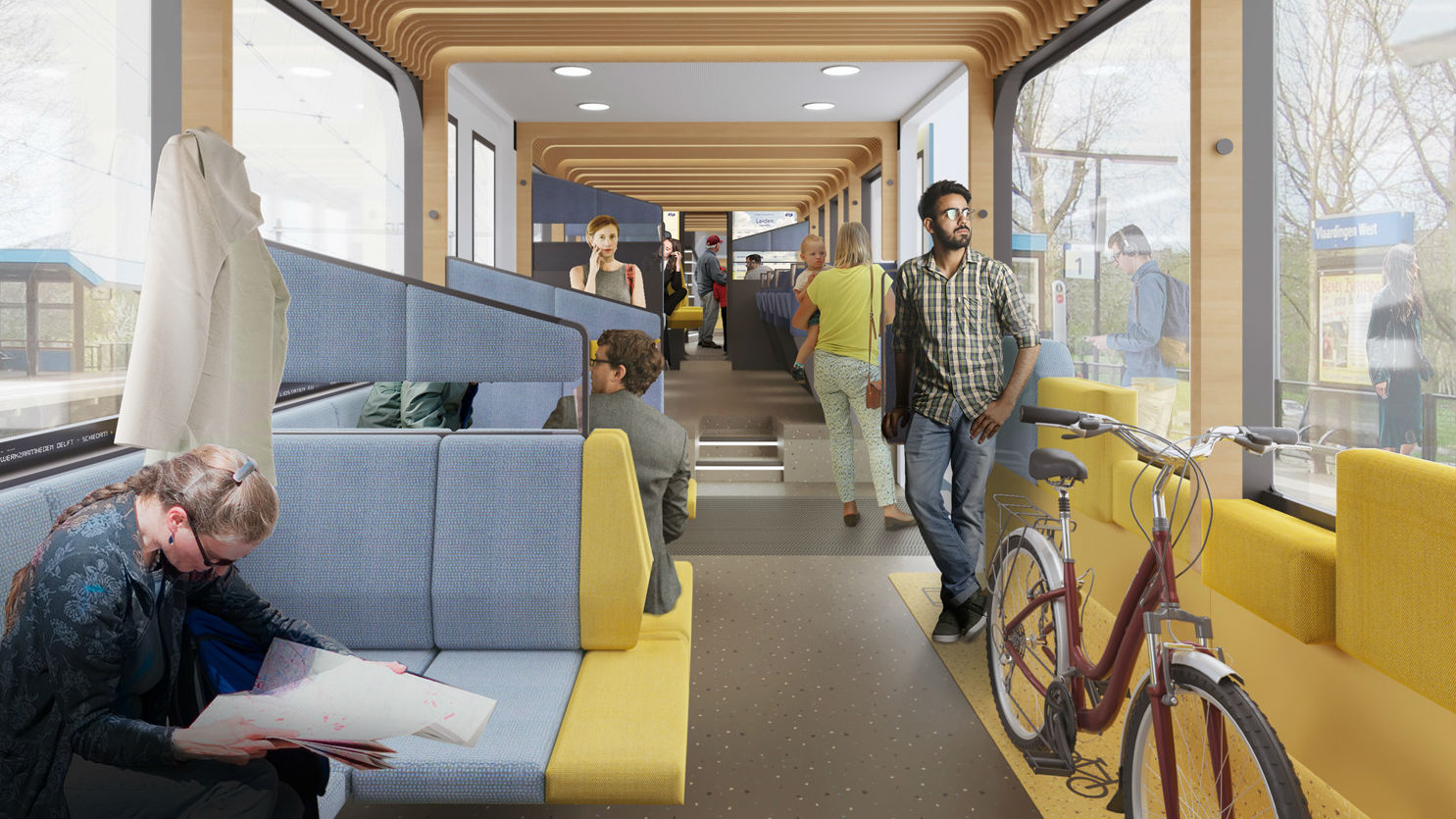 The yellow ‘bricks’ are so-called ‘stits‘.

The second zone is the relaxation zone. Schiffer: “In this area, travellers can read a book or send an e-mail.” These spaces are equipped with higher chairs and tables. This allows the space between the seats to be reduced and the capacity increased. There is also a kind of bar table on the wall, with bar stools. The bar table is mounted under the windows. “Here travellers can just open their laptop or look outside.” 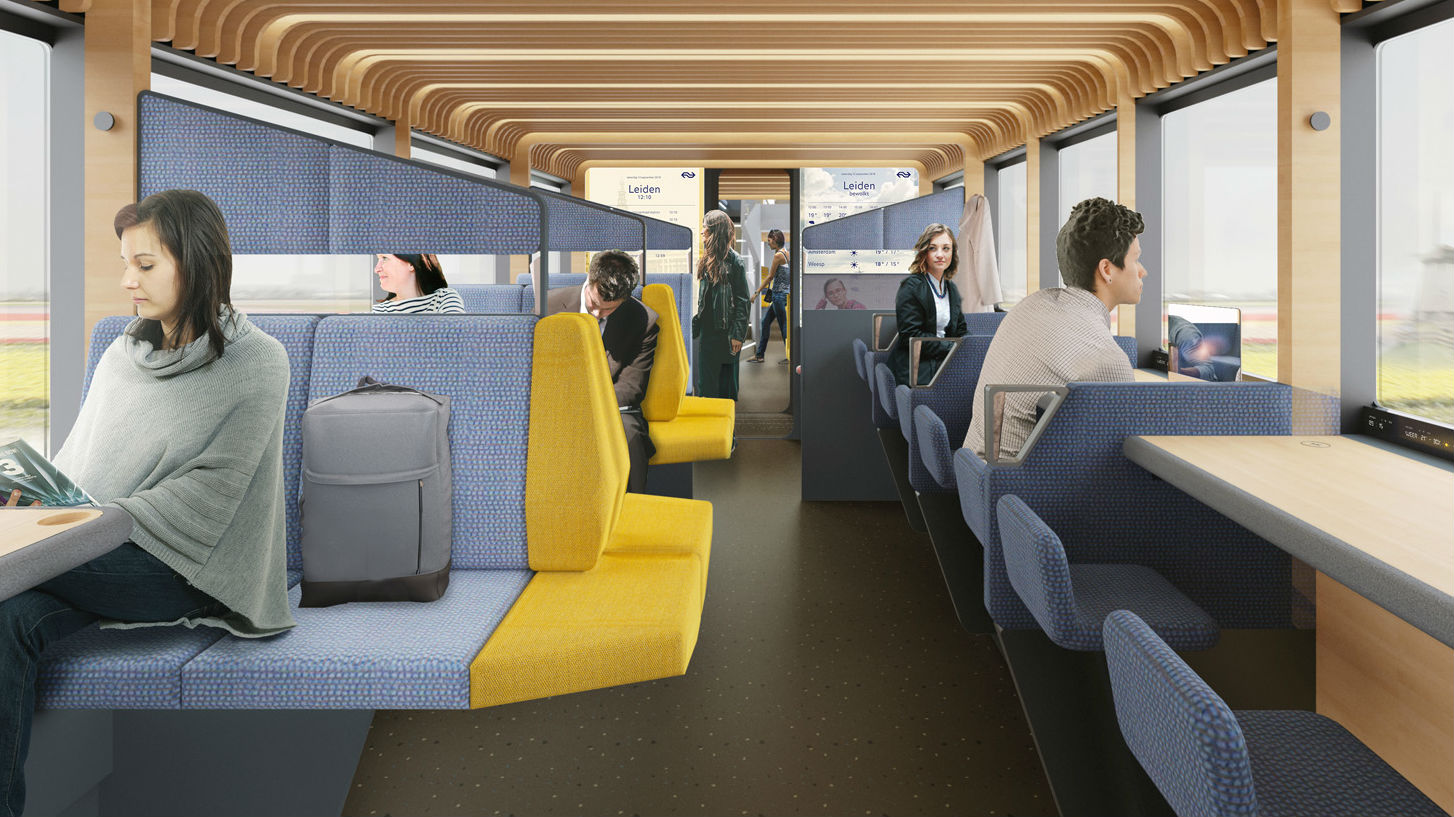 Finally, there is the concentration zone. “It is meant for people who expecting to be on the train for a longer time, where travellers can work and have more privacy,” says Schiffer. In this area, people can sit individually, but if it is busy in the train, two people can be added to each bench. “If the first person moves up a little, a second person can be next to him, and then someone else can sit at the end, maybe not very comfortable, but it’s better than standing.” This allows six people to sit in the same room where two people can sit now.

The total capacity is approximately 10 to 20 per cent higher than with the current trains. “But that does not mean that everyone has a seat, we count the stits.”

These zones each have their own specific place on the train. If people are on the train for a short time, it is logical that they do not have to go far in train to travel comfortably. Commuters who have been on the train for an hour or more, can go further into the train to enter the spaces where people can work quietly or watch a series.

The trains are full of novelties. “During the survey, we received a complaint from someone who felt that a different traveller was typing too hard in the silence coach,” says project manager Joost van der Made of NS. “Then we thought: what is ‘quiet’, really? That word has a different meaning for every traveller, what can we do to facilitate that?” Now, there are four ‘phonebooths’ in each train set, in which people can make a phone call without bothering fellow travellers.

This is also the new design, precisely because there is sufficient space to work quietly, which is interesting for employers, according to Van der Made. “The train is a more environmental-friendly means of travel than the car.” Employers might be more likely to choose to give their employees a card to travel by public transportation, rather than a car. 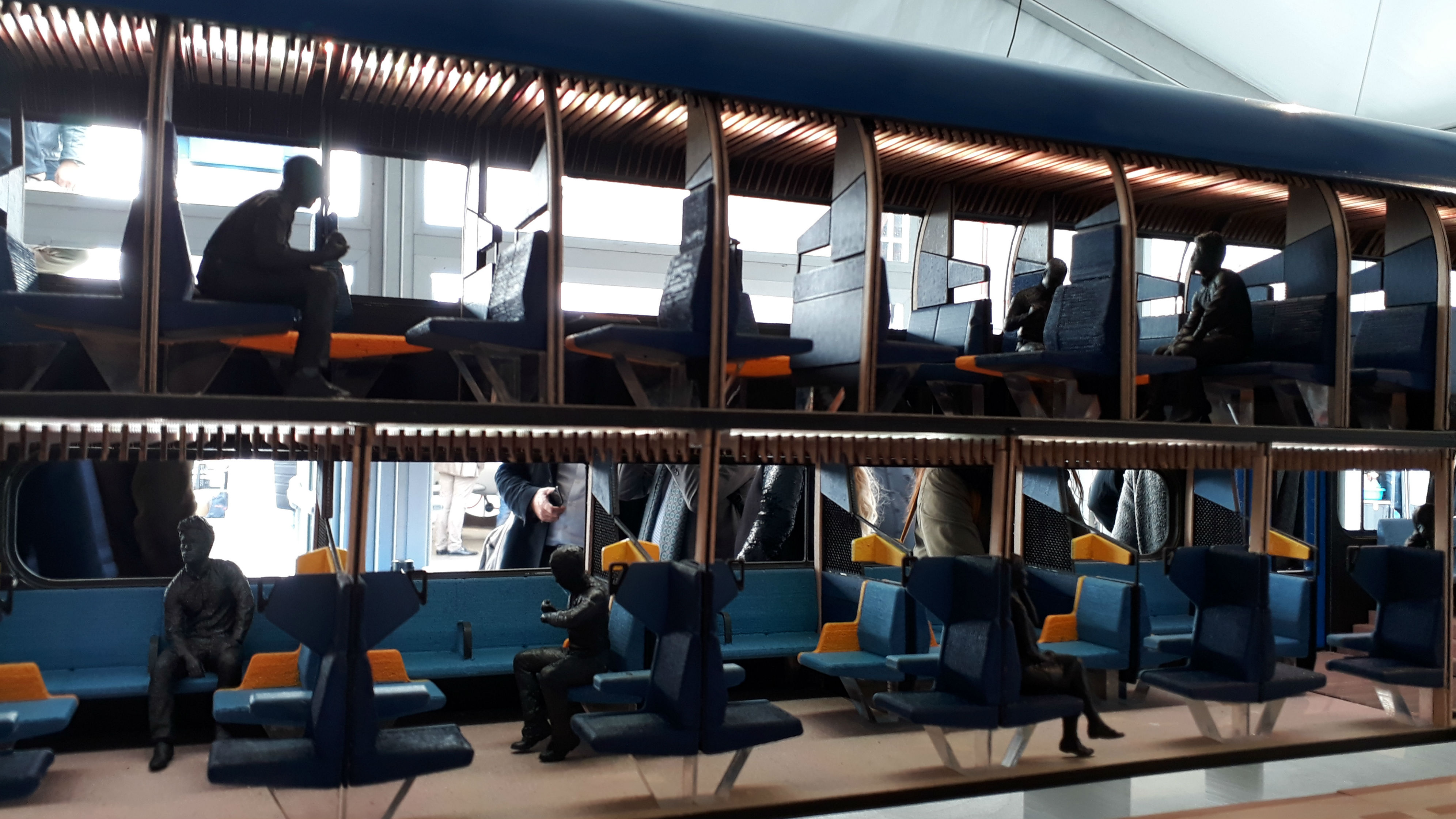 Sustainability was an important aspect when designing the new interior. “At Gispen we always make our products circular. This design is modular, which makes it more obvious to give the components a second life.”

The concept is ready to be implemented, but must first be tested extensively. NS can therefore not say when the new interiors will be fitted on the trains.