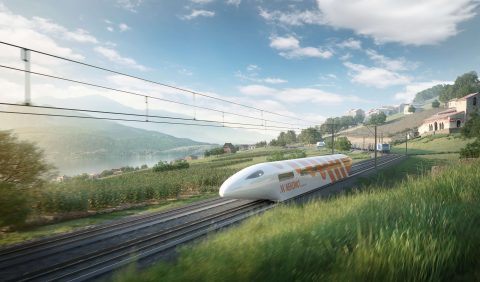 Developing a vacuum hyperloop as a new transport system is complicated and expensive, why not use the concepts of the hyperloop and combine it with the existing railway tracks? That was the question with which Nevomo began technology development between hyperloop technology and the regular railway system. RailTech.com talked with co-founder Kasia Foljanty about the technology and plans of the company.

Nevomo, before incorporation in 2017, started off in late 2015 as a student team taking part in the SpaceX Hyperloop Competition. They have also taken part in the hyperloop competition in the United Arab Emirates where they received the BIM for Innovation prize. Hyperloop is an exciting technology that is in the early development stage, but the team behind Nevomo saw an opportunity in upgrading the existing railway infrastructure instead of developing an entirely new transportation mode.

“The main idea behind the design and the development of the MagRail technology was to use the existing rail infrastructure and turn it into a much more efficient and effective transportation system , while allowing conventional trains to use the same tracks in a conventional way”, explains Kasia Foljanty, co-founder and Chief Marketing Officer at Nevomo. The company was launched in 2017, and a year later Nevomo (at that time under the name Hyper Poland) designed and developed its MagRail concept, which can be used both for passengers and goods transport.

MagRail technology can bring a phased implementation of hyperloop-inspired transportation technology within the existing railway systems. Also without a vacuum, which is a complicated and expensive element of hyperloop. “It is a hybrid solution that allows for the functionality of both the MagRail system and conventional trains on the same tracks”, says Foljanty.

The technology will enable transportation at double the average speed of a conventional railroad, according to Nevomo. MagRail is based on passive magnetic levitation, where the levitation of the vehicle is achieved automatically through the movement of the vehicle after achieving a certain speed. A linear motor, which is placed in the middle of the rail track, provides the propulsion for the vehicles.

The existing railway infrastructure could be upgraded by implementing MagRail technology, enabling speeds of 550 kilometres per hour, Nevomo claims. To build a new Maglev or the hyperloop line, large investments are needed, as well as land to be acquired. “By using the existing infrastructure, the costs and time to implement our system are shorter, which is one of the main advantages”, says Foljanty.

Earlier this year, in the south-eastern part of Poland in Podkarpackie voivodeship, Nevomo completed the first part of construction of the longest passive magnetic levitation test track in Europe using existing tracks. A railway track measuring over 700 metres in length will allow reaching a speed of up to 160 kph. The installation of all the necessary wayside equipment, allowing testing of magnetic levitation among other things, has been completed. The first full-scale test vehicle, equipped with all the necessary components to perform the first tests, was delivered to Nowa Sarzyna in September, and testing could start as soon as this winter.

The next step is further cooperation with the Italian rail infrastructure manager. Rete Ferroviaria Italiana (RFI) and Nevomo are jointly conducting a study of the technology’s use cases and are looking on which lines it would make the most economic and operational sense to use MagRail. A test track in Bologna will be constructed, and there will probably be a bigger prototype vehicle to be tested than in Poland, perhaps even with the first passengers, said Nevomo.

Where the first fully operational MagRail system is most likely to be used, it is hard to say at the moment. “Currently the cooperation with Italian RFI is at the most advanced stage”, says Kasia Foljanty. “It is highly possible that the first implementations will take place in Europe, but we do not rule out the Middle East, as a region very much interested in new technologies and railway innovations”. There, the railway system is also less complex, as well as the approval process.

For the first tests, a bogie, the underside of the vehicle that fits on the rail has been developed. The remaining part of the vehicle will be further developed at a later stage. Nevomo already has some design concepts on how it could look like. Inside, between around 7 and 20 people could fit in one pod, of which several could be coupled virtually, forming a sort of train in the system.

Use for freight transport in ports

MagRail allows railway vehicles to run powered by electricity on currently non-electrified railway sections, and therefore has great potential at terminals and harbours, where freight traffic is still carried by diesel locomotives. In May this year Nevomo and German Duisport, the owner and operator of the port of Duisburg – the world’s largest inland port, signed a cooperation agreement to explore the possibility of expanding Duisport’s capacity with MagRail within the port’s existing infrastructure.

“No catenary and no locomotives are then necessary to move goods within the port”, explains Foljanty. Such use of MagRail does not need a levitation system to operate and allows a significant reduction in CO2 emissions through the electrically driven system of the linear motor.

The company’s biggest challenge is combining all the different components of the MagRail system, and overcoming the regulations after successful tests, says Foljanty. “We are trying to use the existing railway regulations as much as possible, but since it is a new system, it might be challenging on a European level.”

At the moment, Nevomo focuses on the development of the MagRail technology and testing it to demonstrate its capabilities to the world. However, it is not out of the question that once Nevomo is successful with MagRail, the company could continue towards a hyperloop system that could reach even higher speeds.

1 comment op “Why develop new infrastructure for hyperloop when existing rail tracks can be used?”

Why is currently railway “state of the art” standards devastatingly “cementing”?
(Modes handsomely rewarded, by willingly paying clients, all prove robust, resilent and redundant, just railways does not…)
Now, when rapid shifts is the new normal, railways not even withstands current demand…
(Neither core clients, nor any…, afford luxury of not caring about “eta”!)
At reinvestments etc., now “height” has to be taken, for future shifts!
By nature, vulnerable, proven robustness is min, etc.!