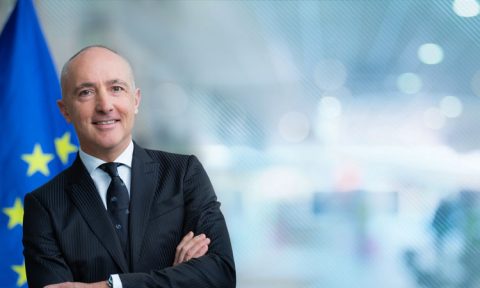 What can we expect from Shift2Rail’s innovation successor?

The European rail innovation programme Shift2Rail is coming to a close, but a new initiative is gearing up to continue boosting innovation. Will it be more of the same? “No, there will be a major difference between Shift2Rail and its successor Europe’s Rail”, says Carlo Borghini, Executive Director of Shift2Rail, which he explains in an interview with RailTech at the arrival of the Connecting Europe Express in Amsterdam.

Shift2Rail was designed to develop solutions for technological problems. “We have researched innovative technologies and some of them are entering the market, but they are somewhat isolated technologies”, says Carlo Borghini. Within the initiative Europe’s Rail, which will start this December, the rail system will be viewed as a system that is integrated. “We bring together the infrastructure, the vehicles, as well as the people working on it. That way, all the technologies are working together to achieve a much bigger purpose.”

Next level of train automation

Within Shift2Rail, tests have been done with ATO GoA2, meaning the acceleration, driving and stopping of the train is automated, but there is also a driver present who can intervene in case of emergencies. “Now we will go to GoA4, so we will go to full automation”.

GoA2 is not implemented yet in trains, should train operators not first implement it, or does it need to be developed to higher automation first? ”The idea is to push research innovation boundaries up to the end to demonstrate with prototyping, and then go to large scale demonstrations to get different trains running in Europe with the technology on board. All technology we are developing should be scalable and modular. So if you deploy GoA2 today, it will be possible to be evolved to GoA4 later on.”

The European Commission is expected to adopt via the regulatory process the TSI (Technical Specification for Interoperability) in 2022, and ATO GoA2 will be part of the specification. “This means operators can decide next year to put it into the market”, says Borghini. It is also being prepared to introduce 5G technology, Digital Automatic Coupling (DAC) and perhaps satellite positioning, the last still being under discussion. “This will pave the way for any type of operator or infrastructure manager, depending on the technology, to decide to implement it.”

The logic of Europe’s Rail is to look at the system in an integrated manner. This means for ATO GoA4, we are not only looking at the technology itself, but also at all the sub systems needed for it, such as 5G, satellite positioning, moving block, virtual coupling, full electromechanical brakes and so on.

This is important because this same technology can not only be used for automation, but also used for cargo, for safety aspects and for many other things.

In the new initiative Europe’s Rail, there will also be new projects that were not part of Shift2Rail. First of all, the European traffic management layer. “It’s currently very difficult to run a freight train from Southeast Europe to the North, for example. You need to have a system capable of supervising the network. We will develop the necessary technology and solutions to be able to have a full position of the network and the opportunity to redirect trains if there are obstacles or situations. It can be considered like a European network management approach to manage the network as a real European network.

A second element that Europe’s Rail will look at is the impact of the innovations. “We will look from the beginning how the system is affected by any type of technology we’re introducing.” There are specific areas of action which will be a focus. One is the secondary lines in Europe. “You also need to consider how we bring people to the different hubs from the regions, otherwise people come by car.” Another key element is the European high-speed network. The European Commission wants to double the high-speed services by 2030 and triple it by 2050.

“Cargo is also a focus, because if you want to reach the target of Europe’s Sustainable and Smart Mobility strategy of 50 percent more freight transport via rail by 2050, we need to break down the barriers”, says Borghini.