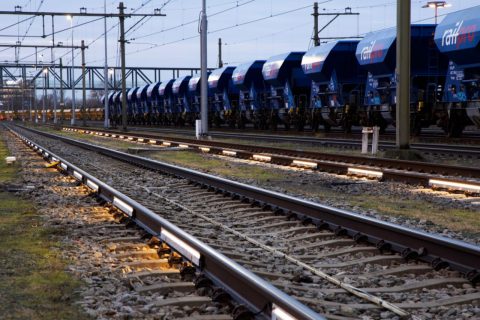 A new way of providing light at railway sidings is developed in the Netherlands. The innovation named RailLight is installed on the sides of railway tracks, resulting in less light pollution and less energy consumption.

In the Netherlands, five projects on three different locations with installation of RailLight have already been carried out, says Jorden Boer, managing director of Triolight, the company behind RailLight. “Several railway companies in Europe have approved the product and plan to implement RailLight. In the third quarter of this year, we will start the first projects in France.”

A big issue that this new way of lighting can tackle is the problem of light pollution. “People that live near a railway siding always see light from the light poles and from the spanwires above the rails”, says Boer. “A lot of light comes off this all night, which not only causes light pollution but also consumes more energy than necessary.”

“In Finland, there was quite some resistance from local residents to a plan for five new railway sidings because of the light pollution”, says Boer. “When our partner showed pictures of what it would look like with RailLight compared to the usual, this problem was taken away immediately.”

Some form of conventional lighting at sidings is necessary of course. After the trains are parked, the driver needs to be able to walk across the siding safely. In some places, RailLight uses only three percent of the energy that is otherwise used for lighting. The flood light effect makes obstacles stand out more. “It is not about the amount of light, but the effect in the end. If you place a flashlight against the wall, you see unevenness much better with less light”, explains Boer.

The installation process of the RailLight also takes less time than usual. One railway siding can be installed with RailLights within 10 days. The overhead lines can remain under voltage when installing the lights, and there is no need to dig in cables. This allows a significantly faster installation and less equipment needed. Instead, the cables go through the outside of the rails and remain visible. The power supplies are dug in, but next to the tracks, so there is no need to walk over the tracks to turn them off for maintenance. One of these power supplies can illuminate up to 180 metres.

Together with ProRail, projects have been carried out on railway sidings in Eindhoven, and together with Dutch Railways NS in Roosendaal. In Roosendaal, 300 RailLights were installed, as well as in Eindhoven. Before that, a three year long pilot project in Lelystad was done. Multiple projects on different sidings in the Netherlands are currently in the pipeline. A frequently asked question is whether the lights on the sides of the track can handle the vibrations from the trains, says Boer. “The lights itself are vibration resistant, and the cables have a coating against rodents, since they are now above the ground.”

Railway sidings can get really hot in summer, up to 60 degrees. The aluminium frame can cool temperatures but the lights are not directly on the track, which get even hotter. The current RailLight is tested between -20 and 60 degrees Celsius.

Now that the light is developed, there are actually more possibilities and uses for it than was thought of initially, says Jorden Boer. “Because the installation can be done so quickly, there is also interest from companies in the field of railway construction, to use it when railway works are carried out.” Also, from Dutch tram and metro companies, there were enquiries whether it can also be installed on those tracks of the vehicle parking places. “The Port of Rotterdam has made a request to use it for the safety of trains in and around the port”, says Boer.

From Belgium there was a request for a RailLight not in white, but RGB with red, green and blue for indoor maintenance of trains. The colour could be switched to red when a train drives in and there is voltage on the track. When the voltage is off and it is safe to work on the train, the lights could become green. Jorden Boer: “These are implementations that we as a company had not thought of beforehand, but do show the various innovative ways to use this lighting.”

With the coupling system the RailLight can be removed and reused, without damaging the rails or the environment. When a RailLight is at the end of it’s lifecycle, it can be recycled for future purposes.