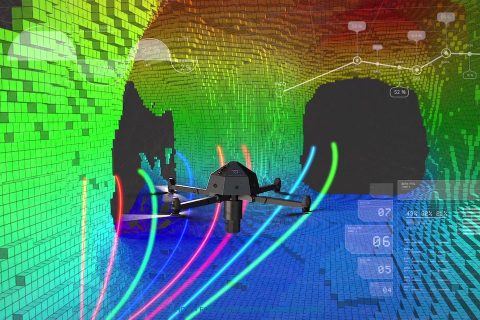 Mapping the unpredictable undulations of underground voids and searching out subterranean subsidence is a hidden but vital part of railway maintenance. Now engineers are auditioning a new player in the cast of solutions. Prometheus – from UK tech boffins Headlight AI – may have its inspiration in sci-fi, but it’s an entirely science-fact answer to a big and expensive question for railways around the world.

Network Rail has long sought cheaper and easier ways of surveying the many underground caves and abandoned mines dotted around its property. The concept of a folding borehole drone, inspired by the film ‘Prometheus’, is now in development, and an in-cave flight test using a prototype is scheduled for this spring. Although the exact design is still under wraps, Headlight AI, working closely with UK universities, has demonstrated the technology to Network Rail, and has field trials already in the diary.

Down in rural Shropshire, around Shrewsbury, the English railway junction town on the Welsh border, there are some tiny little holes opening up in the ground. Certainly not big enough for a pot-holing engineer to squeeze down. Not even big enough to deploy a drone – unless that drone folds up like a space satellite, packed into a rocket, ready to unfurl in the unexplored depths of space. Remarkably, that’s exactly what Prometheus achieves, on its way to uncovering the remote depths below the permanent way.

“Drilling an inspection hole next to a railway is an expensive proposition”, says Puneet Chhabra, co-founder and chief technical officer at Headlight AI, the recent start-up that has caught the attention of Network Rail, the UK infrastructure management agency. “All over the world, the ground is a dynamic environment, it’s unpredictable, and needs constant monitoring. Heavily industrialised countries, like the UK, have centuries of underground history – from mineral extraction to abandoned and forgotten installations.”

“This is a great example of how innovation engagement through companies and workshops can solve long-standing, tricky issues”, says Daisy Chapman-Chamberlain, the rail knowledge transfer manager at Knowledge Transfer Network (KTN), the UK-based organisation charged with developing better links between science, creativity and business.

Often, in railway terms, it just is not practical to open up an inspection hole, without closing the line and disrupting services. “Any agency, whether they be in the rail industry or any other utility, needs to guarantee the foundations upon which they are built”, says Chhabra. “There are however lots of ways to remotely inspect voids, mine-workings, caverns, caves and tunnels, and Headlight AI is involved in developing a suit of solutions. However, it’s the inaccessible, and even risky situations, where Prometheus can be deployed, with minimal or no ground disturbance, and avoiding putting anyone in a dangerous situation.”

Chhabra admits that the prospect of fully-autonomous spheres that fly with no apparent means of propulsion, and map the space around them in realtime with life-like detail, is someway in the future. Yet, he is on the verge of proving trials, and presenting a deployable device. “There are significant challenges to reaching the sort of 3D capabilities seen in that film, but Prometheus is at the edge of what is achievable now, and it’s only going to get better. There are challenges the system can answer now. In the next decade, the hardware and software capabilities will evolve, and bring that sort of 3D mapping at survey-grade, right down to earth.”

Prometheus will be exploring historic mine workings around Shrewsbury this Spring. There is interest too from groups seeking to re-establish rail services over long abandoned infrastructure, including some long and deep tunnels. There are possible applications on other major projects too, such as HS2. Headlight AI is about to illuminate some long forgotten and deep, dark places. Let’s just hope they don’t find any acid-blooded xenomorphs down there, especially ones with a bad attitude and a history of undermining everything in general.