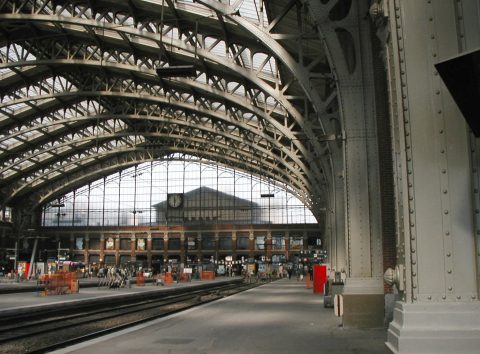 Following Macron’s announcement at the end of November to focus on the creation of the express regional network or ‘Réseau Express Régional’ (RERs) in the 10 largest French metropolises by 2040, studies are beginning to take shape for the ‘Metropolitan Express Service (SEM) of Lille’. The project in the French city on the border with Belgium is expected to cost 12 billion euros.

Since 2019, the Hauts-de-France region, which is the northernmost region of France, the European Metropolis of Lille, and SNCF Réseau have been working together in a steering committee on the “SEM étoile ferroviaire lilloise” project. This project aims to meet the mobility needs of the 3.8 million people who live in the Lille European Metropolis, and the bordering Belgian areas.

The project will also help reduce carbon emissions from regional transportation by increasing the modal share of rail. In fact, it should enable the Hauts-de-France region to reach 200,000 daily passengers on the ‘Transport Express Régional’ (TER) trains by 2040, representing a 60% increase in ridership compared to 2017.

According to SNCF Réseaux, the goal is to double the frequency of peak-hour trains on the Lille rail hub by 2035-2040. (…) This doubling of frequency concerns all passenger services on the six radial routes of the Lille rail hub, both fast and omnibus services.” More specifically, this means a train every 10 minutes in rush hour, serving the axes connecting Lille with Hazebrouck, Lens, Valenciennes, Douai, as well as Béthune via a new Lille-Hénin railway line.

This new 37-kilometre two-track line will connect Lille to Hénin-Beaumont, which will in turn become a hub, connecting lines from the former mining basin, including Lens, Liévin, Béthune, and Arras. According to local media outlets France 3 and France Bleu, it will take twelve years to complete the project, including eight years of technical studies and four years of construction. In addition, the technology required to cross the catchment areas that supply the city with drinking water could increase the cost of the project, estimated at 2 billion euros.

As the Lille-Flandres station is saturated, a third underground station will be built under Matisse Park, 35 metres deep, to avoid the subway tunnels. This new station, whose cost is estimated at 2 billion euros, should see 16 million passengers per year, compared to the 10 million of Lille Europe.

An underground station will allow travellers to cross the metropolis by train, as the Lilles-Flandres station is a dead-end station, and the urban density prevents the construction of new overhead tracks. It will therefore be necessary to build about 17 kilometres of tunnels, according to an initial study by Egis.

Recently, another underground station is to be built under Lesquin airport. This will connect the airport to the city centre in 9 minutes, and to the railroad line towards Valenciennes. These underground stations allow a better connection between the basin and the North-West, towards Armentières and Hazebrouck, and the North-East, towards Roubaix, Tourcoing, and Kortrijk.

Taking into account inflation and the 20 years planned for the completion of the project, the final cost is close to 10 billion euros. The French government will finance the majority of the project via the Transport Infrastructure Financing Agency (AFIT). Europe will also participate in the financing of the lines connecting Lille to the Belgian cities of Courtrai and Tournai.

It is also necessary to take into account the 2 billion euros needed to purchase 70 new train sets, as well as the additional monthly cost of 200 million euros for the regional council, to be added to the 530 million euros that the local authority pays the SNCF each month to run the TERs. As such, the total cost of the project will be at least 12 billion euros.