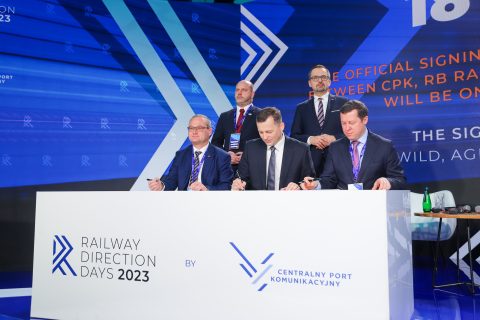 For the development of high-speed rail in the ‘Three Seas Region’ between the Baltic Sea in the North, the Black Sea in central Europe and the Adriatic Sea, Poland’s Centralny Port Komunikacyjny (CPK), Rail Baltica and Czech railway manager Správa železnic will cooperate to make an interconnected high-speed rail network a reality. Additionally, CPK and Ukrainian Railways signed a cooperation agreement with the intention to realise a high-speed rail link from Poland to Ukraine.

The three parties signed a Memorandum of Understanding (MoU) to lay out the cooperation principles and further steps in strengthening cooperation during the Railway Direction Days in Warsaw this week, organised by Centralny Port Komunikacyjny. CPK is the state-owned transport development programme in Poland responsible for development of the CPK Hub in Poland, comprising a modern airport in central Poland and investments in almost 2,000 kilometres of new railway lines, mainly high-speed.

Rail Baltica is the cross-border high-speed railway project designed to connect the Baltic States Estonia, Latvia and Lithuania, as well as create a link with the wider European railway network by introducing standard railway gauge (1435 mm) to the Baltic countries. Czech rail infrastructure manager Správa železnic has plans to develop up to 700 kilometres of new high-speed lines in the Czech Republic, connecting to neighbouring countries. With all these projects in the works, a new interconnected high-speed network in Europe is the vision, vertically crossing Central-Eastern Europe.

A day after the cooperation agreement with Rail Baltica and Správa železnic, CPK also signed a cooperation agreement with Ukrainian Railways for the development of new cross-border connections in European standard gauge, in particular the construction of a high-speed railway line. To this end, a joint feasibility study will be conducted for the construction of a HSR line on the Warsaw–Lviv–Kiev route. CPK and Ukrainian Railways will also jointly seek opportunities to obtain EU funding for the planned lines. “I hope that cooperation with the CPK will bring us closer to the construction of the first HSR with a European gauge and will be an important step towards Ukraine’s integration with the EU”, commented Volodymyr Shemaev, Director of the Office of International Projects of Ukrainian Railways.

The intention is to cooperate in order to promote and develop high-speed rail (HSR) projects within the respective countries and across the continent, ensuring increased knowledge-sharing about matters such as traffic forecasting and traffic modelling in the different areas of high-speed development. They also want to identify new opportunities, jointly develop planning timelines and align the implementation of preparatory works and investment models.

The proposed integrated HSR network spans across most of the twelve Three Seas countries, including Estonia, Latvia and Lithuania; Poland, Czech Republic, Slovakia, Hungary; and Austria with onward connectivity towards Romania, Ukraine and countries outside the Three Seas area such as Germany.

“This is a unique, one-of-a-kind time in our common history when, functioning together in the region, we can create an unrivalled rail transportation offering”, says Mikołaj Wild, CEO of CPK. “We are drawing lessons from HSR investments in the West. As a result, our projects can bring about an economic domino effect, giving a boost to other industries and sectors.”

Agnis Driksna, CEO of RB Rail AS: “Considering the scale and impact of the Rail Baltica project not only in the Baltic states, but also the whole of Europe, we must recognise benefits and use the full potential from strengthening cooperation with other megaprojects”.

The project delivery organisations have the support of international allies, who point out that the planned infrastructure will also be important for military movements. US Ambassador to Poland Mark Brzezinski commented on the cooperation: “Current events have shown that reliable and resilient rail infrastructure is so incredibly important for the safety and security of the region. An investment in this infrastructure is an investment into the long-term security of the region. It is just as important as our collaboration on national security, energy security, and defence”.

To showcase the benefits of the high-speed rail network in the Three Seas region, CPK commissioned global consultancy Steer, which also performs analyses for the European Commission, to prepare a report. It includes a cost-benefit analysis of the combined high-speed rail plans, which includes the proposed Polish HSR network, Rail Baltica, the proposed Czech HSR network and the overarching North-South V4 corridor of the Visegrad group (V4) countries Hungary, Slovakia, Czech Republic and Poland. These countries proposed a HSR network in October 2018, linking their capitals Warsaw, Prague, Bratislava and Budapest, as well as connecting major cities also to the Western HSR railway network with onward connectivity to Vienna.

The benefits calculated by the firm would be around 119 billion euros, of which the majority of 55 billion corresponds to passenger travel time savings. Offset over time by a steady flow of economic, social and environmental benefits such as saving travel time, less accidents as accidents in rail are statistically significantly lower and less pollution, over a long period, the investment is calculated to economically break even towards the end of the reference period, which is around 2080. There is the additional (environmental) benefit of shifting freight traffic from the road to the railway, which is not taken into account in the analysis.

The first preparatory construction work on the new CPK airport in Poland is planned to begin in 2023, and the first sections, including the Warsaw – Łódź route, should be launched as early as 2028. Rail Baltica was originally planned to be finished in 2026, but it is already clear it will take some more time for the full project to be completed. The European Court of Auditors (ECA) suggested that the whole corridor from Tallinn via Riga and Kaunas (with a connection to Vilnius) to the Polish border would probably be completed in 2030. The first sections of Rail Baltica railway lines are planned to be launched starting 2027.

The assumption is that a section of the V4 HSR line between Prague, Brno, Bratislava and Budapest will also be built at this time. In the following years, next sections from Poland will be connected to the V4 railway line: Katowice-Ostrava and so-called Małopolska-Silesian Node. In the Czech Republic, operations on the first sections of the new high-speed lines are planned to start around 2030. This means that at the end of this decade, the connected Three Seas high-speed network should at least have taken some shape, though there is a lot of work to be done.

As adding to redundancy, and to quality of infrastructure within hemisphere, yes, central Europe railways – from Adriatic, to Baltic Seas,etc.,- should be awarded high priority!
(With separate corridors, high speed separated from cargo, heavy duty, interest of both client categories are met with, etc.)
Devastating bottlenecks, as within current TEN-T, now decisively have to be outed!

The proposed HSR tracks would allow several night train connections, such as Riga to Berlin/Prague or Warsaw to London/Paris/Frankfurt and Warsaw to the Adriatic, and speed up existing ones. These are completely disregarded in the report, commissioned by the airport entity CPK, which may explain that neglect.