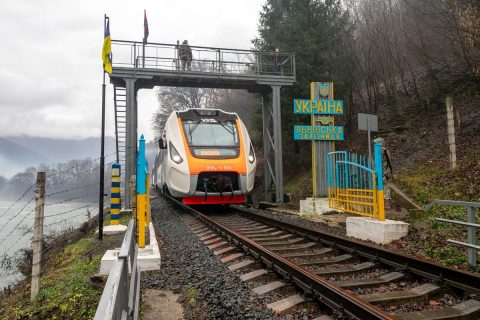 Ukrainian Railways on Tuesday afternoon celebrated an inaugural trip into Romania via the newly restored section Rakhiv-Berlebash on the cross-border line into the neighbouring country. Orest Klympush, the first Minister of Transport of Ukraine between 1992 and 1994, had the honour of driving the train across the border.

The service follows track reconstruction work on the Ukrainian side of the border completed back in August. During a period of around two months, the section Rakhiv-Berlebash (19.3 kilometres) was rejuvenated. The line connects the Romanian hub of Constanta on the Black Sea with Kyiv and had been in disrepair for 17 years.

For the past months, Ukrainian Railways waited for their Romanian counterparts to do their part in reopening the line. On Tuesday, Alexander Kamyshin, CEO of Ukrainian Railways, took to Twitter to announce the inaugural service from Rakhiv, using a new diesel train that was entered into service during the war.

New connections for freight and passengers

Kamyshin stressed that the new line opens opens up a new avenue for rail freight transport to and from port of Constanta, a major hub on the Black Sea. Passengers on their part gain new international transfer options now that it is possible to reach the airport in the Romanian city of Cluj-Napoca. The head of Ukrainian Railways also highlighted that many Ukrainians have friends and relatives in the neighbouring country. According to Kamyshin, some 30.000 Ukrainians live in the Maramureș border district in Romania.

The railway chief said a few issues regarding border control and Customs remain, but added that Ukrainian vice-prime minister Oleksandr Kubrakov and the committee for Ukrainian-Romanian governmental cooperation had thrown their support behind the new cross-border link.

Crossing the border from 🇺🇦 to 🇷🇴. pic.twitter.com/Ut03Z8BfR6