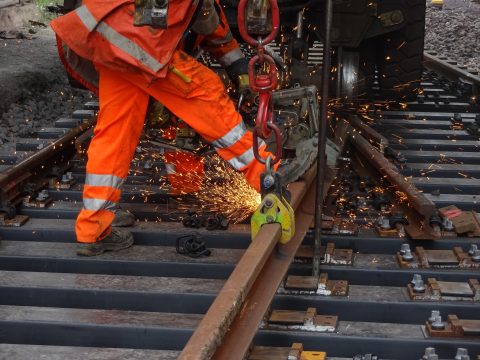 ‘Working with polymer sleepers requires a change in mindset’

Polymer sleepers are gradually gaining in importance when it comes to sleeper replacement jobs. However, they are not yet the product of choice for the construction of new tracks or for the large-scale removal and replacement of wooden sleepers. Josef Lindlbauer, Business Development Manager of the STRAILway division of KRAIBURG STRAIL, talks about the benefits of polymer sleepers in the current business climate.

The STRAILway polymer sleepers are made from fibre-reinforced polyolefin. The development of these sleepers started around 2014. Because the railway sector was not yet very familiar with the possible application of polymer sleepers, it took some time before all the specifications and requirements were known. For this reason, it was not until 2016-17 that the newly developed sleepers actually became available. “The market is still in its infancy, and we are only at the start of our journey”, Lindlbauer tells RailTech.

With many impregnating agents for traditional wooden sleepers now banned, there is a growing need for alternative sleepers. And while companies can resort to using concrete sleepers or more novel green sleepers that use sulphur concrete, polymer sleepers offer a third way. They combine environmental benefits in that they are made from recycled materials and 100-percent recyclable with maintenance benefits. For example, the sleepers have an expected service life around 50 years; more than double that of concrete sleepers. They are also more resistant to screw pullout forces during maintenance.

That does however mean that the polymer sleepers are around 2-3 times more expensive than regular concrete sleepers are. However, Lindlbauer explains that after the first maintenance cycle, the sleepers will start to deliver cost benefits. “True, the application of the polymer sleepers requires a bit of a change in mindset to one that does not solely focus on the purchase but also takes into consideration maintenance and lifecycle costs”, he says.

“We see that a discussion about safety and sleepers is ongoing in the industry. While that has not translated to more attention for polymer sleepers per se, it is good that there is now a conversation about what materials to use and the role of maintenance. The rising costs and shortages of manpower are putting a strain on this type of work”, Lindlbauer notes.

The growing attention to and importance of circularity and carbon footprint in the railway sector might in the end billow the sails of the STRAILway polymer sleepers. The company prides itself on the circular properties of the sleepers, which contain no harmful substances and consist of secondary raw materials that can be recycled. The sleepers themselves also do not release any contaminants. “Nevertheless, for the ecological aspect to be impactful, industry-wide standards such as the EN 15804, the European norm for Environmental Product Declarations (EPDs), need to be adhered to”, Lindlbauer argues.

Indeed, a “change of mind” now is needed!…
(Regardless of “expectations”…for clients, that have shifted strategy, to On Demand, now quality of service rendered is too low!)
“Voids” and “hung sleepers”, etc., no longer are accepted! Neither are standards, optimal between WWI and II! (Yes, composite has got an edge – but for replacing wood.)
Resiliency, readiness for the rapid shifts at Market, has to be provided for!
(All other modes, those robust, sustainably add load capacity, etc., etc..)