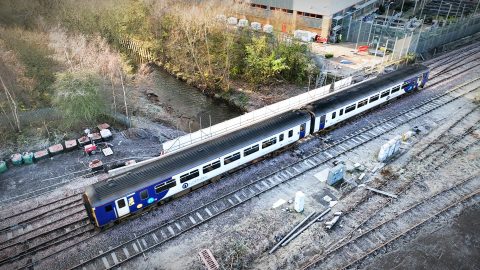 On October 19, a freight train carrying powdered cement derailed. This not only caused major damage to the rail infrastructure, but also created a giant mess. Giant vacuums had to be deployed to remove around 80 tonnes of powdered cement from the three of the 11 wagons that needed lifting.

Further more, eight metres of track had to be replaced, as well as 400 metres of cabling and two switches. The Victorian-built railway bridge needed repairs and reinforcements, too. Soms 125 tonnes of concrete was poured for the job. All in all, more than 40 people worked seven days a week for 7 weeks to get the job done, putting in a total of 25,000 hours.

“I’d like to thank passengers for their patience while we worked tirelessly to get the railway back up and running after it was severely damaged by the freight train derailment.This has been a very complex recovery and repair job”, Mark Evans, Network Rail senior programme manager, said.