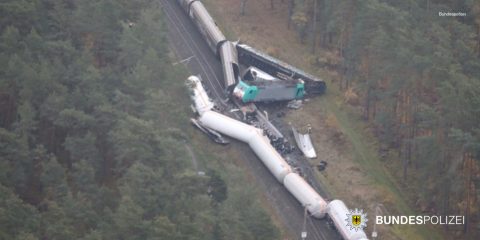 The collision that took place last Thursday between two freight trains has resulted in a longer disruption of traffic than originally anticipated. The Berlin – Hannover railway line will now remain closed until at least the end of November. What is more, preliminary findings by the police released on Monday state that the accident was the result of a human error.

On Thursday morning, a freight train, which stopped at a railway signal near Gifhorn, was hit from behind by another that did not stop. As a result of the collision, a total of four tank wagons overturned, resulting in a leak of propane gas from two of the tank cars. Since then, specialists and the fire brigade have been pumping out some of the propane gas and flaring it. Only then can the salvage and clean-up work continue.

Deutsche Bahn initially announced that the busy railway line would be closed until at least Tuesday, but it reassessed the time needed to repair over the weekend. “Due to a route closure, there will be delays and cancellations between Berlin and Hanover until at least Sunday, 27 November 27 2022”, it wrote on Sunday evening. The overhead lines in particular suffered extensive damage.

Too much gas in the air

The reason for this is an increased concentration of gas in the air, news website NDR reports. On Saturday evening, the emergency services had to interrupt their work because of this. They had counted on the wind to displace the gas, but the wind was not as strong as expected. Without it, it result in an explosive, dangerous air-gas mixture, the local news site cited emergency sources.

The repair of the overhead lines could therefore not be commenced as soon as planned. The four tank wagons filled with propane gas, as well as an empty wagon and locomotive still remain on the track as well. These issues can only be resolved after the gas has dissipated.

According to the first findings of rail accident investigators of the federal police, the accident was not cause by a technical failure of the approaching train or the technical safety equipment of the railway line. After evaluating data from the train operation, they found that the affected section of track was wrongly cleared by an employee of Deutsche Bahn, although a freight train was still stopping on the section. The employee allowed the following freight train with 25 tank wagons to run at 40 kilometres per hour in this section, which then crashed into the stationary train. The DB employee is now being investigated for dangerous intervention in rail traffic and negligence resulting in bodily harm.

Many long-distance trains are currently being diverted. The busy line mostly facilitates passenger traffic, impacting many trains on the route. Freight trains will be diverted via Uelzen until further notice, and delays and cancellations should be expected.

Human factor, regrettably is a too well documented risk factor – thus to be calculated with, by IM:s and safety authorities?…
(At UK , 1000 truck drivers yearly strike viaducts, etc…)
Currently reported, a fact and “state of the art”, is voids and hung sleepers, as well as, at DB tracks, now hounded of thousands of sleepers now an added, acute “technical” risk factor…
Still, if evident it is, that no such here was present, by elderly technicalities, safety at “busy lines”, now is too low?