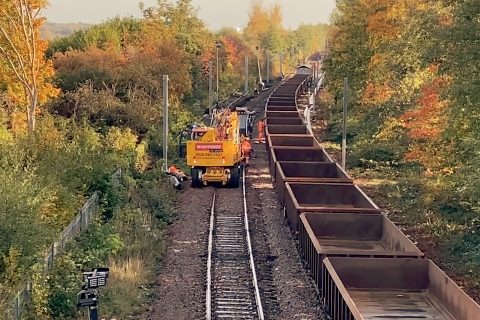 Bid to extend England’s Tyne and Wear Metro to Washington

The metro rail network that serves the neighbouring cities of Newcastle, Gateshead and Sunderland, in the north east of England, is currently undergoing a much needed modernisation. Future plans are also being made for a southwards extension. If approved, the improved network would bring rail services back to the large community of Washington. The first steps have been taken with a business case to support the proposals.

Transport North East, the consortium with responsibility for the regions metro development, has published the first steps of the business case, for approval by the North East Joint Transport Committee. The business case builds on a previous engineering feasibility and upon demand forecasting work undertaken as part of the wider suite of corridor studies for the region. Other transport improvements in the region include work underway to reinstate conventional heavy rail passenger traffic on the line to Blyth, north of Newcastle.

Reconnect a string of communities

The new Metro connection would reconnect a string of communities in the former coal-mining area south of Newcastle. The line, if built, would run from Pelaw to South Hylton, via Washington, with new stations proposed in Follingsby, Washington North and Washington South. The business case forecasts that the new ‘Washington Metro Loop’ will cost 745 million pounds (888 million euro) to deliver. That sum would include additional new Metro rolling stock to support extra services on the line.

The proposed new line forms part of a wider project to re-open the Leamside Line in full, with work already underway with the development of a new mainline station at Ferryhill in County Durham. The predicted regional economic benefits of the new line are calculated by Transport North East to run to 90 million pounds (117 million euros) per year. Washington is currently the fourth largest community in England without any sort of rail service.

Metro development is progressing hand in hand with other rail projects in the region. Newcastle is at the northern extrem of the Northern Powerhouse Rail project – albeit that project is subject to review in a wider national economic reappraisal.Work is already underway on a project to dual track on some of the outlying stretches of the network.

“I have championed the re-opening of the Leamside Line for over 17 years, so to see a new business case submitted for a new Metro line connecting Gateshead, Washington and Sunderland is a huge step forward”, said Sharon Hodgson, the member of parliament for the Washington and Sunderland West constituency, through which the proposed Washington Metro Loop would progress. “We are one step closer to re-opening the Leamside Line in full”, she added.

Freight development in the region has also been of note lately. Traffic has been increased at Blyth in the north. The proposed development of a ‘giga-factory’ for electric car battery production has required ground works supported by rail freight. However, that project is under re-evaluation pending a funding issue.

Maritime traffic has been a more robust success for rail freight. The welcome return of traffic to the Port of Sunderland has been widely reported. The port there has been growing its bulk traffic handling capacity in the past year. The entire region was of course the most prominent part of the coal industry, and historically generated huge volumes of traffic. The remnants of the infrastructure that handled that traffic is still apparent from the East Coast Main Line which serves the region.

“The re-opening of the Leamside Line, and in particular this second phase, is strategically important to the growth of new and existing businesses within the region”, said John Marshall, Chair of the North East of England Chamber of Commerce. “The Washington Metro Loop provides links to the International Advanced Manufacturing Park, the wider North East including major development at Port of Tyne, as well as a gateway for regional growth, development and transformation.”

Yes, but quality first, then quantity!
Quality pays and within transports in particular. Goal is nearness!
Repairing of infrastructure, predictive, “optimal maintenance”, etc., regardless of now “big business”, still in no respect optimal, as simply Bottleneck of Industry…
(At ware owners supply chains, just risk of a risk means added costs.
Low risk is high quality!)
Weight wise railways has got the edge and for large scale feeding of ports it is the Alt. I, etc., etc.

Yes. Start with the rail system, THEN worry about the football club!