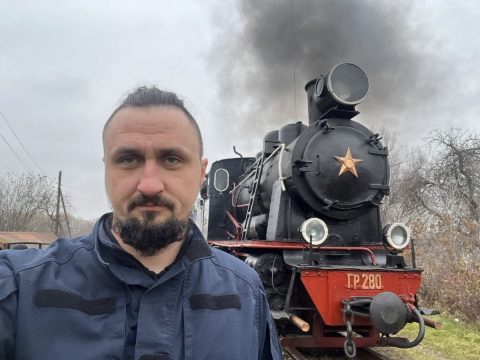 The plan B to keep trains running in Ukraine: diesel and … steam locomotives?

How to keep Ukrainian trains running when a large part of the energy infrastructure is destroyed? Reserve diesel locomotives have been deployed by Ukrzaliznytsia on de-energised sections of railway. The head of Ukrainian Railways Alexander Kamyshin even shared a video of a steam locomotive running on a narrow-gauge railway.

Nearly 30-40 percent of the Ukrainian energy system was destroyed in recent Russian missile and drone attacks, said President Volodymyr Zelensky during a meeting with European Commissioner for Energy Kadri Simson last week. Therefore, alternatives to electric trains have to be ready as a backup. “When Russians shell our energy infrastructure, we switch to diesel locos and keep running”, said Alexander Kamyshin, the head of Ukrainian Railways on twitter. This week, the Ukrainian railway boss also said in a tweet that he spent 5 nights out of 7 on a train last week, saying it is the “best way to check your service level on the ground”.

On Sunday, Kamyshin posted a video of a steam train running, saying he “was checking today ‘plan B’ for diesel locos – steam locos”. In a humorous mood, the head of Ukrainian Railways Kamyshin even shared a unique recipe from the day of running with the steam locomotive: Iron Scrambled Eggs. “Recipe is simple: eggs fried in lard on the shovel in the furnace of the steam loco”.

Steam loco sounds like a music, isn’t it? pic.twitter.com/HlXCR5TqUi

The question is to what extent also old-fashioned steam locomotives could really be used for regular rail services, as the trains from the video runs on a small, narrow-gauge railway of which there are only a few sections left. According to Oleksandr Shevchenko, Deputy Director of the Passenger branch of Ukrainian Railways, there is at least one steam train that can run on the standard Ukrainian railway gauge, and two that can run on narrow-gauge lines, he said to RailTech. These trains are normally used for entertainment purposes, such as with Christmas. “I don’t think it is too practical to use them for evacuation, but we will use them with Christmas also this year, as there is no reason not to”, he says. “But if we would need the steam powered locomotive to move wounded people out of the war zone, we will do it. We will run with horses if we have to.”

Ukrzaliznytsia presented a new train schedule on 28 October, with 14 new connections, including 4 international trains to Chisinau in Moldova (for the first time since 1998), Przemyśl and Chelm in Poland and Austrian capital Vienna. When the updated schedule was announced, Ukrzaliznytsia noted that the number of carriages in 17 existing trains had been doubled at the stations with the highest passenger traffic. This makes it possible to use the locomotive fleet more efficiently and reduce electricity consumption for traction, and saves 25,000 kWh per day, according to the Ukrainian Railways.

With so much of the energy infrastructure damaged, railway stations, too, are dealing with being disconnected from electrical energy via the grid. Therefore, Ukrzaliznytsia received 35 generators at the end of October for uninterrupted operation of railway stations in Ukraine from the Red Cross Society of Ukraine. “These generators will make the stations independent from possible enemy attacks on the energy infrastructure of Ukraine. Thank you to the Red Cross of Ukraine for the cooperation”, said Oleksandr Pertsovskyi, a member of the board of Ukrzaliznytsia and head of the passenger department. Points will be set up at the stations where people can get tea, coffee, and warm up. The total cost of humanitarian aid is around 300.000 euros (UAH 12 million).

Earlier last month, Ukrzaliznytsia also received 154 water heaters from the Ukrainian Red Cross, which were distributed among 79 stations. They ensure a continuous supply of hot water to rest rooms, rooms for passengers with children and other premises of the station, which is “especially critical in the conditions of the approaching winter period”, says Ukrzaliznytsia.

On some occassions, also a damaged catenary causes problems. On 3 November, Ukrzaliznytsia relaunched a train connection with Kupyansk, a city in Kharkiv Oblast on the border with Luhansk, which was liberated by Ukraine around the end of September. In this case, the overhead lines were also damaged, and the restoration of the section was completed just the day before the relaunch of the connection. “We restored the two sections of the track that were attacked […] and eliminated a total of 49 damages on the way, with the restoration of more than 70 kilometres of catenary network”, said Kamyshin the day before the relaunch. It will take more time to restore a blown-up railway bridge on the route, but Ukrzaliznytsia already reopened the route,  covering 95 percent of the way by train, and the last mile from the Osynove stop platform to Kupyansk by free shuttle buses.

Ukrzaliznytsia is pulling out all the stops to keep trains running, regardless of the cirumstances. It recently relaunched a competition between depots in repairing locomotives, also for electric locomotives that can still run. “I like it because that’s how we get better results and depots exchange experience. We have to care properly about our old fleet until we get a new one”, said Kamyshin. For example, he shared pictures of a Georgian-made, 57-year old cargo electric locomotive with 7 million kilometres of milage, and a 56-year old Czech-made passenger e-loco. “Back to life, ready to go.”