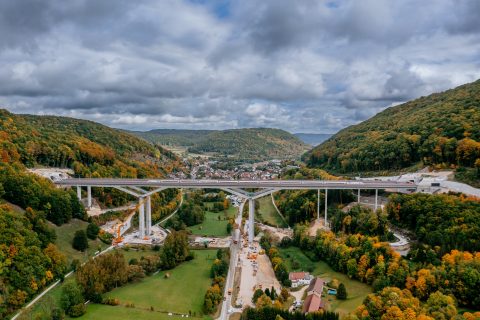 Deutsche Bahn is one month away from the opening of the new Wendlingen–Ulm high-speed line, which will coincide with the start of the new national timetable on December 11. Once officially inaugurated, the line will help cut travel time between the major urban centres of Munich and Stuttgart by around 15 minutes.

That may not seem like a lot, but because the new section will also allow additional trains and because it largely runs parallel to the busy highway 8, DB argues that the train is now a much better match for private vehicles between the two cities. The operator will add 20 daily high-speed long-distance (ICE) trains between Munich and Stuttgart for a new total of 90.

Furthermore, with a new stop in Merklingen, people from the Baden-Württemberg country side will also have improved access to long-distance services. A key section for new high-speed services, the Wendlingen–Ulm line will also enable faster connections from the federal states of Bavaria and Baden-Württemberg to Frankfurt International Airport and onwards to major urban centres in North Rhine-Westphalia.

Train drivers are currently exploring the route by way of training, and around 250 drivers complete the new route on a daily basis. The new Wendlingen–Ulm line is dominated by the Fils valley bridge, which consists of two separate tracks, measuring 485 and 472 metres in length, respectively. At a height of 85 metres, the bridge is the third-highest railway bridge in Germany. There are tunnels on either side of the bridge: the Bossler tunnel and the Steinbühl tunnel.