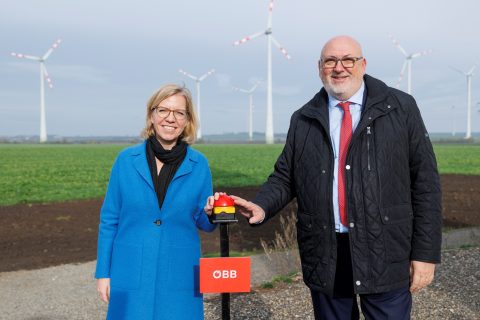 In Lower Austria, ÖBB has put the world’s first wind turbine that is solely used for traction current into operation. With a tip height of 200 metres and a rotor diameter of 112 metres, the wind turbine has an output of around 3 megawatts.

According to ÖBB’s calculations, the newly inaugurated wind turbine generates enough energy to power 1,400 train journeys from Vienna to Salzburg each year. The turbine in Höflein came at a cost of 6 million euros and feeds directly into the overhead line of the nearby railway, providing green energy at minimal energy loss.

For this, ÖBB used a specially developed switching station. The station is designed in such a way that it can be transportable. The operator wants to roll out more projects where electricity is generated onsite and feed directly into the catenary to reduce energy losses of conversions or transporting it over longer distances. This was also the reasoning behind the first traction current solar power plant that ÖBB established a few years ago in Wilfleinsdorf.

Generating its own energy is one of ÖBB’s key pillars, and currently its various power plants generate about 60 percent of the company’s energy needs. In the coming years, ÖBB wants to increase this to 80 percent. The company has earmarked 1 billion euros in investment in green energy until 2030.

Still, however, current electrification of railways is cause of severe disturbings, thus a devastating suboptimation, now due for a shift.
(For clients, ware owners, risks at supply chain means costs.)
For the needed, a sound, sustainable shift, simply quality of service rendered has to be raised, to be equal, or higher, than alternative available.
All old standards, now root of disturbing, have to be outed!
(Now neither core clients of railways, afford luxury of not caring about “eta”…)