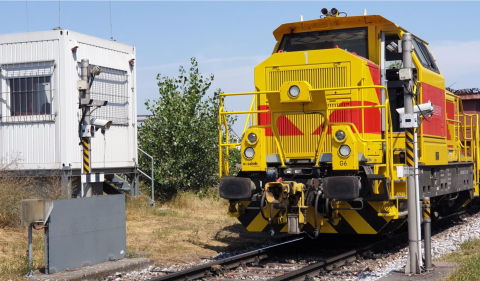 Published on 10-11-2022 at 11:30
A Himmelsbach wagon recognition installation in Germany Himmelsbach

German firm Himmelsbach is a pioneer of 25 years in the field of automatic identification, registration and inspection of railway cars. The company’s analysis systems have been deployed in a host of countries, ranging from Kazakhstan and European countries to Saudi Arabia. General manager Michael Himmelsbach spoke to RailTech.com about the company’s solutions.

Himmelsbach’s setup for the identification and recognition of train cars began a quarter of a century ago with the UIC wagon numbers. With the groundbreaking first adoption of artificial intelligence in the process 15 years ago, the number of items that can be recognised on captured images has grown exponentially. Himmelsbach’s systems work in temperatures from minus 40 to 60 degrees Celsius. Recordings can be made day and night and from virtually every angle.

“We can now accommodate virtually every customer request, ranging from inspecting wheels and brake blocks. Whether the dome of rail tank wagons is closed or not, to the type of metal scrap that is being hauled”, Himmelsbach says. He adds that in recent years, the company has begun offering the technology to build up 3D-images of wagons.

An exciting development to look forward to is the rollout of 5G, he says. “Especially in the more remote locations in the world, it means we now only need a 230 volt connection for power. Everything else can be handled wirelessly”.

Himmelsbach also provides the software interface to the host systems that rail companies use, in order to access and process the gathered data. “For example, we can work with Schenck process systems, such as the weighing solutions for heavy industries. They do the weighing, we do the identification. We use XML-based interfaces, which is a widely used standard.”

A basic setup by Himmelsbach will feature off-the-shelf products such as camera’s, housings, LED flashes and laser distance sensors. The core components in the associated cabinets are of course made in house. A relatively straightforward installation with a camera left and right of the track, the poles, cabinet and software interface will cost around 40.000 euros. More elaborate setups with gates easily go for double the amount.

All over the world

In 2023, the company will install at least six new setups at various refineries and steel mills. Himmelsbach will also install its first installation in Thailand next year. There have been setbacks too, however. Mostly as a result of the war in Ukraine. “We had a lot of activities in Russia (Gazprom, Lukoil, Rosneft, Taneco), but they’ve obviously been halted. And it is unlikely that our installation in the Donbas region in Ukraine is still up and running”, Himmelsbach says.

Himmelsbach has built around about 140 installations around the world. On one location in particular, there are 20 systems in operation. On the cross-continent Marmaray commuter railway line in Istanbul, there are two: one on the European side, one on the Asian side.

Interested in camera and recognition solutions? Himmelsbach is a partner of the upcoming Intelligent Rail Summit, which will be held in Konstanz, Germany, on November 16-17. Join us and come and meet Michael Himmelsbach as well as other industry representative and experts.

Like perfume: Good that it exists, a pity however, that it is needed.
(Current mantra, predictive, “optimal maintenance” – now is big business – at Industry, of railways… – but regrettably, by nature, suboptimal.)
Since ware owners have shifted strategy to “On Demand”, now all other modes, those handsomely rewarded, by willingly paying clients of transports, all prove: redundant, resilent and robust…
Accordingly, standards, now root of disturbing (broken rails, etc…) have to be outed!