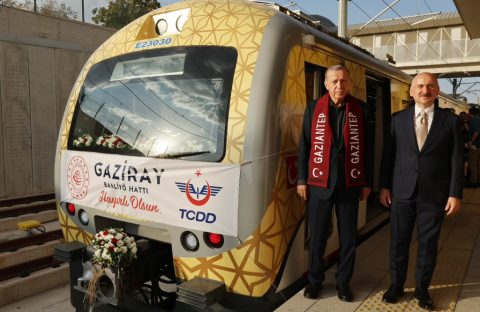 Published on 07-11-2022 at 14:30
Turkish president Erdoğan and Transport Minister Karaismailoğlu at the opening 2022, twitter.com/akaraismailoglu

Turkish president Recep Tayyip Erdoğan and minister of Transport and Infrastructure Adil Karaismailoğlu inaugurated the Gaziray commuter railway system in the eastern city of Gaziantep over the weekend. Work on the line coincided with installation of high-speed tracks for the future Mersin-Adana-Gaziantep high-speed train project.

The Gaziray railway is double-track route of 25.5 kilometres along 16 stations, effectively linking the city centre of Gaziantep with suburbs to the north. Trains that will be travelling at a maximum speed of 100 kilometres per hour will leave every 5 minutes. The Gaziray system is forecast to have a daily capacity of 350,000 commuters per day. Travel time between the starting point and the terminus station will be around 30 minutes.

The Gaziray system is Turkey’s fourth urban commuter railway system. Istanbul boasts the cross-continent Marmaray, Izmir has the Izban, while people in the capital Ankara make use of the Başkentray railway system.

In tandem with the Gaziray railway works, additional infrastructure jobs were carried out to untangle local train travel. Two separate high-speed tracks for the future Mersin-Adana-Gaziantep line were installed as well, which means that 112 kilometres of track in total was installed along the 25,5-kilometre route. The new high-speed project is tentatively scheduled for completion in 2025.