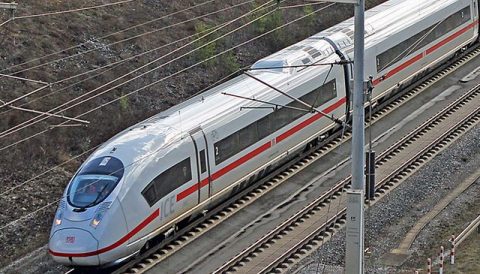 Deutsche Bahn has detailed its new timetable, which will come into effect in December. The highlights include two trains between Cologne and Munich every hour, a faster connection between Munich and Stuttgart, extra seats on the high-speed lines to Frankfurt Airport and additional connections to other European countries. Tickets will become available on Wednesday.

The trains between Cologne and Munich and between Stuttgart and Munich stand to benefit from the Wendlingen–Ulm high-speed line, which will be commissioned in December. It will cut travel time between Stuttgart and Munich by around 15 minutes. The new line will also facilitate trains between Cologne and Munich, a journey that will take 4 hours and 15 minutes. Having to change trains to travel from North Rhine-Westphalia and Bavaria will therefore be a thing of the past.

Secondly, the Basel-Cologne-Dortmund ICE line will extended to Hamburg via Münster, Osnabrück and Bremen. This means that people in these cities can get to Frankfurt Airport more frequently and with greater ease. The cities of Munich and Augsburg will also gain additional services to the airport, with the number of available seats forecast to increase by some 60 percent.

The new timetable will also bring with it better international connections, such as additional roundtrips between Stuttgart and Zurich and between Berlin and Warsaw. There will be also be a new Zurich-Berlin-Prague night train service with stops in Erfurt, Halle and Leipzig, among other cities. The existing Zurich-Hamburg night train will see a route change to also include Bruchsal, Heidelberg, Darmstadt, Hanau, Verden and Nienburg in the service. Finally, the circular Munich-Venice-Rijeka-Zagreb-Vienna-Budapest night train service will start in Stuttgart to also add Göppingen, Ulm and Augsburg as stops.

Next up, the new German timetable will see the new ICE 3neo high-speed train make its debut between Dortmund, Cologne and Frankfurt. The first trains are expected mid-December. DB also add more XXL ICE 4s to the fleet. The Hamburg-Basel route will be one of the lines that will see the high-capacity trains in action. At 374 meters, the XXL ICE 4 can accommodate 918 passengers. Towards the end of this year, DB hopes to have added around 19,000 additional ICE seats on its high-speed routes.

It is not all good news though. DB warns that track renovation and construction works will continue unabated in 2023. This means that services will be affected. The operator will share additional information about the planned works in December.

Hm…, simple as that?
Railways and nations, Commission, Industry…, etc., should learn from success story, the automobile (contemporary with decline of railways)!…
Advantages of automobile:
Redundancy,
Resilency and
Robustness,
all current, serious shortcomings of railways…, urgently, decisively and properly have to be attended!
Accordingly:
Electrification, yes, but a timely, etc.
Rails, basics, shall not remain, cause number one of derailments…, etc.
Quality pays!