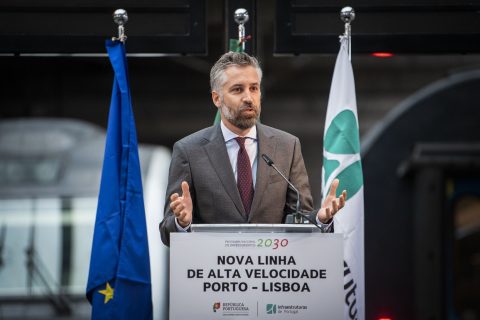 Published on 05-10-2022 at 10:42
Portuguese Minister of Infrastructure and Housing, Pedro Nuno Santos, at the presentation of the Porto-Lisbon high-speed line Rui Manuel Farinha / Lusa

A new high-speed line between Lisbon and Porto was announced by the Portuguese government last week. The long-discussed project now seems to start lift off, but cities in the south of the country that are known for tourism feel overlooked in the rail plans.

“After decades of disinvestment in the railroad, the closure of lines and prioritising the highway and individual transport that have brought us to an enormous dependence on the car, we are carrying out a revolution”, said Portuguese Minister of Infrastructure and Housing, Pedro Nuno Santos, at the presentation of the Porto-Lisbon high-speed ​​line. The project involves an investment of around 4.9 billion euros until 2030, when the new railway is expected to be completed.

The future line that will connect Porto and Lisbon will reduce travel time between the two cities from the current 2 hours and 50 minutes with the Alfa Pendular service to 1 hour and 15 minutes. The high-speed line will be double track, and the current existing railway stations along the route will be adapted. The project also foresees the construction of a new railway station in Vila Nova de Gaia.

Bringing the north and south together?

According to the infrastructure minister, the line will “bring the north and south of the country closer together and  bring the interior closer to the coast”. “We are truly going to shrink the country”, said Nuno Santos. However, with the line only going upward from the capital, the regions to the south of the capital benefit less from the line.

“This is good news for the north. Once again, for the south, there is absolutely nothing new”, said the mayor of Faro, Rogério Bacalhau, to Lusa news agency in reaction to the presentation, saying the government forgot the south ‘again’. There was no mention of a possible extension to Faro or other cities in the south in the future.

For the mayor, “as a general rule, politicians, namely those in the central administration, remember the Algarve region only in the summer months July and August, a time that has passed”, and he (jokingly) repeated that the region “will have to wait for next year”.

The same Alfa Pendular trains that currently run between Lisbon and Porto also run to Faro, which takes about three hours from the capital. That is however around the same time to travel between Porto and Lisbon now, and there a new high-speed line is considered necessary. During the presentation it was said that the ambition was to eventually connect the high-speed line further north to the Spanish railway network by connecting to Vigo in Galicia.

The project will be implemented in a phased manner, adjusted to the country’s financial capacity. This will  guarantee that each stage offers direct benefits to the people, says railway manager Infraestruturas de Portugal (IP). The first phase should be completed in 2028, and will bring a 40-minute reduction in journey time between Porto and Lisbon.