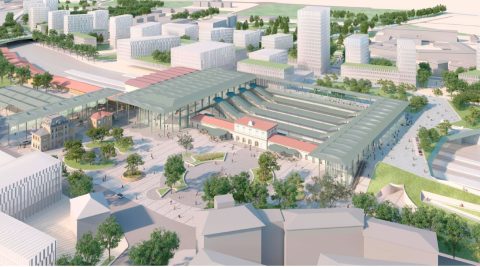 Rete Ferroviaria Italiana (RFI) and the Bergamo municipality have presented their plans for the city’s new train station. The 80-million euro project will be part of a larger redevelopment effort planned for the area, known as the South Gate.

RFI aims for the station to be an integrated mobility hub, which will enable passengers to transfer with greater ease to Bergamo’s trams and buses. Furthermore, the area will be closed to motorised traffic other than taxi’s.

According Bergamo mayor Giorgio Gori, the number of railway passengers is forecast to increase from 38,000 per day at present to around 70,000 when the project is complete. RFI itself did not communicate an opening date but local media put it at 2026. The new station represents an investment of more than 80 million euros.

While the current station will be preserved, it will incorporated in a much larger, new structure that will feature two new entrances and sky bridges on each side of the existing building. New elevators and escalators will carry people to the platforms. The adjacent terminal station for the TEB trams will be visually incorporated into the new train station. Finally, a new walkway will connect the opposite ends of the tracks to create a more unified area surrounding the station.

Bergamo is home to around 120,000 people and a popular destination for low-cost carriers offering trips to nearby Milan.