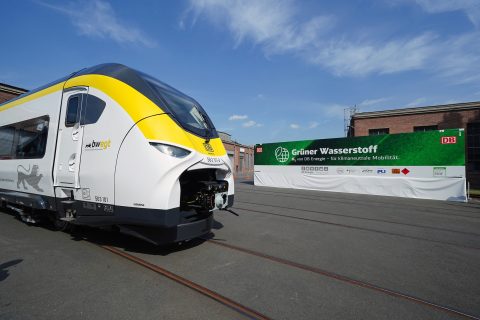 Deutsche Bahn (DB) and Siemens have commenced trial runs with the recently presented Mireo Plus H hydrogen train. They’ve also begun testing the refuelling process as part of the H2goesRail project, a joint effort to supply green hydrogen and set up a fast refuelling system as well as maintenance infrastructure.

The tests started last Friday in the presence of DB ceo Richard Lutz, Siemens chief executive Roland Busch and State Secretary at the federal ministry for Digital Affairs and Transport Hartmut Höppner. Use of the mobile hydrogen filling station was trialed at the Siemens test center in Wegberg-Wildenrath. According to DB and Siemens, the refuelling proces is now just as fast as that of a regular diesel multiple unit.

In a nutshell, DB is using its renewable power for electrolysis to produce green hydrogen directly on site, where it will also be compressed and stored. The storage unit and tank unit are designed in such a way that they can be transported by train or truck, as they have the size and shape of a regular twenty-foot equivalent unit.

The Mireo Plus H hydrogen train was first tolled out in May. The two-car version has a range of 800 kilometres, while the three-car variant can cover around 1,000 kilometres without refuelling. The train’s top speed is 160 kilometres per hour.

Two separate testing programmes with the Mireo Plus H are planned for next year, one in Bavaria, the other in the state of Baden-Württemberg. DB will be involved in the latter programme. From January 2024 onwards, the two trains will be entered into regular service. In Baden-Württemberg, the hydrogen train is scheduled to run for 120,000 kilometres.