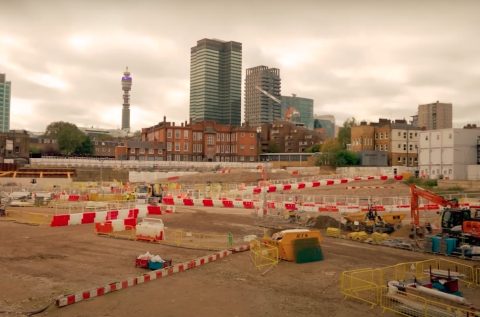 The vast HS2 construction site that is London Euston

If anyone remains sceptical, and still has lingering doubts that the high-speed railway line between Birmingham and London will go ahead, they need only visit the southern end of the borough of Camden. There, for all to see from the top deck of a red London bus, is the huge construction site that will eventually be the London terminus of the 100-billion pound (118 billion euros) HS2 project.

HS2 is Britain’s new high speed rail line, which will eventually directly serve communities northwest England, and initially link the West Midlands with London will have its terminal at Euston, the traditional destination for southbound trains from the West Coast Main Line, Europe’s business mixed-traffic route. Ten new platforms are being constructed adjacent to the existing terminal in a project of a scale not seen since the original railway was carved through inner London in the nineteenth century. The new trains are not expected to run until sometime between 2029 and 2033.

In keeping with what is widely described as the largest infrastructure project in Europe, the site of the London terminal is a huge undertaking. The area is bigger than the whole of the current 16-platform station. Sixty acres (over 24 hectares) of land, directly to the west of the existing station is cordoned off and a hive of activity. Two of those existing surface platforms will be sacrificed to accommodate the ten 450-metre-long subsurface platforms, which at peak operation will be used by up to 17 high-speed trains per hour.

It’s difficult to visualise right now, but when the ground-level concourse is completed, it will be 300 metres long and will allow free movement for both passengers and visitors through the station and will open out onto new public spaces at the north and south. The station hall, which will enclose an area 20 percent bigger than London’s landmark Trafalgar Square, will become the largest station concourse in the UK. Once complete, HS2 will more than double the number of seats out of Euston station during peak hours and free up space on the West Coast Main Line for more local and long distance commuter services.

New along with the old

The new HS2 station at Euston will be impressive from the top deck of that London bus. However, it will not be very exciting for trainspotters. The entire rail operation will be buried under the concourse. Nevertheless, the new station will bring huge improvements for passengers using the high speed link, national rail and the London Underground.

The footprint of the new station will make possible a direct connection with the outlying Euston Square tube station. For the first time, tube passengers will have seamless connections between the Northern, Victoria, Circle, Hammersmith and City and Metropolitan Lines at Euston. Notably, the Elizabeth Line does not intersect with any of the ‘Euston Road’ terminals – including St Pancras International, the terminal for the existing high-speed line (HS1) to the Channel Tunnel. A direct link between the two high-speed projects was dropped at an early stage.