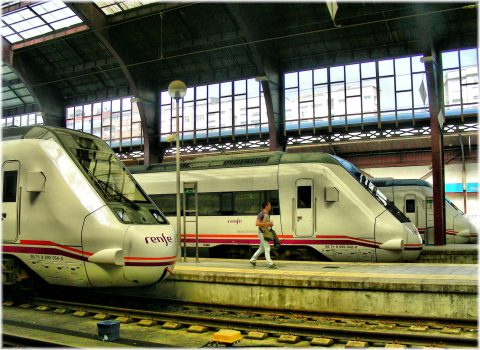 A Renfe medium-distance train got caught in a forest fire near Bejís in the Spanish province of Castellón earlier on Wednesday, resulting in a panic among passengers and at least 20 injuries.

The train came to a halt amidst the flames, images shared on Twitter reveal. Some passengers tried to escape the train, local media report. However, upon seeing the encroaching flames, they quickly returned inside. According to reports, the aborted escape attempt left 20 people injured with burns, three of them seriously.

Local police has started an investigation into the incident. Renfe, too, has launched an enquiry. In a preliminary statement, Valencia regional president Ximo Puig said he had received news from the operator, saying that the train driver followed procedure when he stopped the train. The driver had been granted permission to return to Sagunto in the Valencia province yet was prevented to act in a timely manner due to the panic among passengers. Puig could not offer a response when asked why train services were not suspended in the area due to the wild fires.

The incident quickly sparked outrage in parliament, with the Partido Popular demanding clarification from national Transport minister Raquel Sánchez Jiménez. “How is it possible that a train ended up crossing the fire zone?”, Castellón senator Salomé Pradas queried.

Last month, too, passengers on boar a Renfe train had a scary moment when their train came to a halt near fires.

WATCH: At least 20 passengers who jumped from a train as it was being consumed by a forest fire near Castellón in northeastern Spain suffered burns, three of them seriously. #Spain #wildfire pic.twitter.com/lYkb5Le4eY