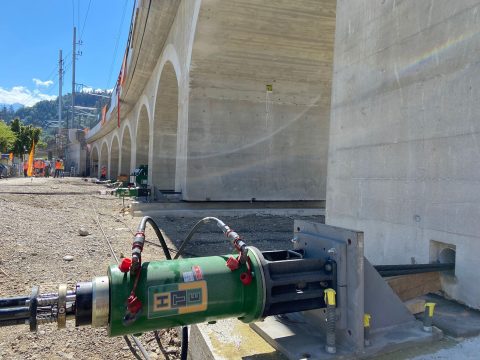 ÖBB-Infrastruktur moved a first set new concrete support structures for the Inntal viaduct into place on Tuesday. The viaduct is part of the Austria’s Karwendelbahn and was in need of repairs

The concrete support structure, comprising eight arches and weighing a total of 2,200 tons, was gradually moved across a series of specially lubricated skidding tracks. Using seven hydraulic presses, the structure was inserted at a rate of 26 centimetres per push. The entire operation was performed in only an hour.

Construction on the new set of arches began in April, after it was found that eight of the 16 original ones had to be removed because of their structural condition. The next set of arches will be renewed and installed in 2025.

ÖBB-Infrastruktur will now focus on putting in a new track grid, ballast and railings. It will also adjust the overhead lines and reinstall the signals. Trains are expected to resume services across the viaduct later this month.