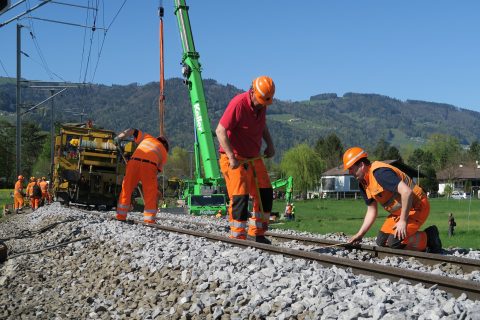 Does the rail sector need a maximum temperature for outside work?

European labour unions have called upon the European Commission to introduce a maximum temperature for outside work, which would include trackside work. RailTech’s Dutch sister publication SpoorPro spoke to local unions and contractors to see where they stand on this issue.

The railway network in many countries was put under strain last month due to scorching temperatures, necessitating repair works in far from ideal conditions. This exposes workers who do outside work to great risks. In Spain, a street cleaner and a warehouse worker collapsed from heatstroke in July, as temperatures neared 40 degrees Celsius.

“Workers are on the frontline of the climate crisis every day and they need protections to match the ever-increasing danger from extreme temperatures,” Claes-Mikael Stahl, deputy secretary general of the European Trade Union Confederation, said at the time.

Hans Walthie of Dutch union FNV told SpoorPro that the organisation was pleased to see a coordinated effort on this topic. He also stressed that eventual measures are still a topic of discussion. “For someone working on a roof a certain temperature will feel very different than to someone carrying out a job in the shade.” Henri Jannssen, also of FNV, added that you would also have to factor in the effects of humidity and wind as well. “Temperature alone only gives you so much indication of the heat burden”.

Major railway contractor VolkerRail uses a system whereby so-called heat categories and the type of work indicate the time someone can work. Colour code yellow starts at 30 degrees Celsius for work that is not very demanding but at 20 degrees for work that requires a lot of effort.

For colour code orange, those values are at 36 and 26 degrees Celsius, respectively. Workers are also cautioned not to work by themselves when code orange is in effect. If the work entails shovelling or carrying heavy burdens, code orange kicks in at 20 degrees Celsius. It will also limit the time workers can spend outside doing those jobs, the company said in comments.

Temperatures above 40 degrees Celsius mean code red, regardless of the type of work. A job can still be carried out, but only with a heartbeat monitor and temperature gauge.

In any case, a project manager on site can always take additional measures to protect track workers, such as additional and often mandatory breaks.

‘People can decide for themselves’

Strukton argues against top-down measures regarding high temperatures. “We take care of our people in all circumstances, which includes such measures as an amended roster, additional breaks, personal protection items and plenty of water in the case of high temperatures. Above all, our people have the expertise to decide whether carrying out a job in either extreme heat or blistering cold is a good idea. We would not want an imposed temperature limit to get in the way of that”, a spokesperson says.

The company also highlights, like the union did before, that wind direction, humidity and can differ from location to location. That said, Strukton says it is more than aware that under certain circumstances, it needs to draw a line.

“For example, we would not want to expose our workers to storms”, the spokesperson says, adding that following Storm Eunice earlier in the year, the sector decided on an appropriate time to begin carrying out the repair works.

The original article was written in Dutch by Robin van den Bovenkamp for SpoorPro.