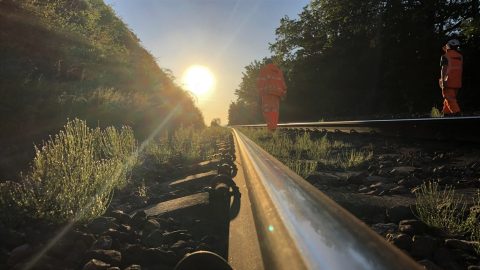 Following this week’s unprecedented heatwave, Network Rail is gearing up its efforts to make the UK network more resilient by launching a special taskforce for hot weather. “We’ve got to pull out all the stops to make our railway as resilient as possible”, says chief executive Andrew Haines.

The taskforce will investigate and make recommendations on how the railway can develop its resilience during hot weather. Four key areas will be considered, from timely weather forecasting to informing passengers and disruption management, which are each led by an independent expert in their field.

Three of the areas focus on gathering insights from other countries and making comparisons with international rail networks that are more used to dealing with extreme heat and fluctuations in temperature, such as Australia.

First of all, the likelihood of more frequent extreme hot weather events in the UK will be examined, and how detailed and timely weather forecasting can be maximised by Network Rail to mitigate the impact of heat on its infrastructure. This will be led by Julia Slingo, former chief scientist at the Meteorological or ‘Met Office’, a renowned expert in climatology. Slingo recently led a weather action task force focussed on equipping Network Rail with a better understanding of the risk of rainfall to the railway.

As this week showed on the East Coast Main Line, damages to the overhead line are a common cause of delays and disruption with hot weather. A line side fire caused 25,000 volt overhead electric cables which power trains to down in Harrow, and overhead lines on other sections were also damaged. Therefore, options will be investigated to ensure the railway infrastructure can continue to function safely and reliably during very hot weather, specifically the overhead line equipment and the tracks. This will be led by Douglas Oakervee, who served as chair of Crossrail and HS2 and is a former president of the Institution of Civil Engineers, with 60 years of experience in engineering and counting.

Next, the operational standards, policies and practices which could allow services to continue to operate safely and without highly limiting speed restrictions in extreme heat will be explored. Drawing on the experiences of Australian railways, it will be led by Simon Lane, former Managing Director and CEO of railways in Melbourne and New South Wales respectively. He also led a review for the government of Victoria following a period of extreme weather in 2009.

Because in the end, railways exist to transport passengers (next to goods), Network Rail will also examine how it communicates with passengers in the run-up to and during periods of extreme weather, as well as in its planning for disruptive events. Led by Anthony Smith, chief executive of the independent transport watchdog Transport Focus, which represents bus and road users as well as rail passengers.

Pressure on the infrastructure

Andrew Haines, chief executive of Network Rail: “The weather we’ve experienced this week has put a huge amount of pressure on our infrastructure, our staff and our passengers, and with extreme weather events becoming more frequent as our climate continues to change, we’ve got to pull out all the stops to make our railway as resilient as possible.

“The pressure the past week’s heat put on our railway shows that despite progress, there is still some way to go”, says UK Transport Secretary Grant Shapps. He said that one of his key priorities has been ensuring our infrastructure is resilient enough to deal with extreme weather conditions, “this Government has invested billions of pounds to do just that”.

“The taskforce will provide us with the knowledge and experience to bolster our railway and ensure it’s robust enough to last – whatever the weather.”

Yes, resilient, but sustainably, by a timely system, provided for!
(“Extreme conditions” is no excuse, at any vitals of society.)
Electrification, yes, but a timely, etc.!
Simply, any technicality, timely, at Shift 100 years ago, since long, should have “expired best date”…
When timely, at railways, Rail (now benefitting of high qual. steel…) – by System…, does not remain Weak Link, etc.!
(Acc. “Wiki”, now “Autos” and “bil”, both are short for “Automobil”, the success story, etc., etc…)