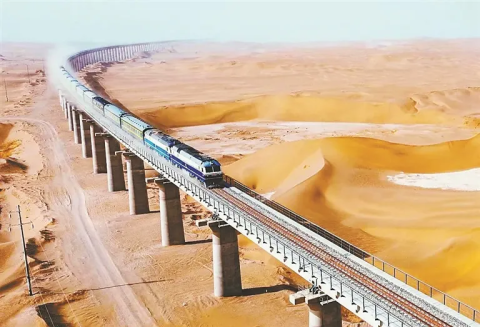 China opened a railway line around its largest desert, the Taklimakan, in the country’s northwestern Xinjiang Uygur Autonomous Region on Thursday. The railway line is 2,712 kilometres long and allows for speeds of up to 120 kilometres per hour. It has 22 stations, six of which also offer cargo services. It is the first that time a railway line enables trains to skirt around a desert, according to the China State Railway Group (China Railway).

The opening of the Hotan-Ruoqiang railway line was a fact when it was linked with the Ruoqiang-Korla section of the Golmud-Korla railway line, and the Korla-Kashgar and Kashgar-Hotan sections of the southern Xinjiang rail line. However, construction of the megaproject started in December 2018.

The Taklimakan desert is the second-largest in the world and only slightly smaller than Germany. Due to the high-speed service, trains can cover the entire distance in 11 hours and 26 minutes. The completion of this line has connected five counties and certain towns in southern Xinjiang that were previously inaccessible by train. It will also facilitate the transportation of Xinjiang specialties including cotton, walnuts, red dates and minerals to other parts of the country.

At the same time, the new railway link may facilitate transportation to the international market. The region is the westernmost stop on the network to the west. With the renewed commitment to complete the China-Kyrgyzstan-Uzbekistan (CKU), the desert loop may connect the region to Central Asian countries as well.

The railway line runs through the southern edge of the Taklimakan Desert, and sandstorms in this region pose a serious threat to the railway. Therefore, anti-desertification programmes were carried out simultaneously with railway construction.

Five viaducts with a total length of 49.7 kilometres lift the railroad to protect it against sandstorms, said the China Railway. Meanwhile, a total of 50 million square meters of grass grids have been laid and 13 million trees including rose willow and sea buckthorn have been planted.