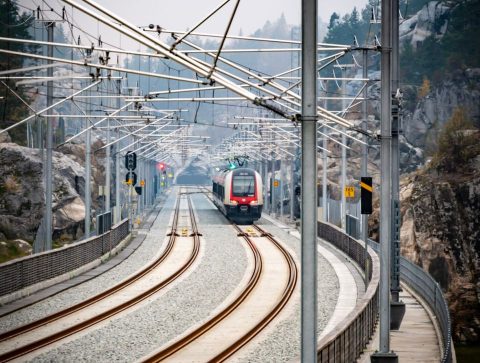 Saving energy in rail: ‘The most sustainable energy is the energy you do not use’

“Rail is already in the spotlight because it uses less energy than other modes of transport, but there is also still much to be won through energy savings”, says Bjørn Lysne, energy metering & settlement expert at European Partnership for Railway Energy Settlement Systems (Eress). At RailTech Europe on 22 June, he will talk about incentivising sustainable behaviour in a bid to save energy.

The increasingly turbulent energy market sets the price for energy, without which no electric train journey can be made. Though it is out of the domain and control of railways, it does not mean the rail sector has to sit back.

“There is an energy deficit in the EU, it produces less energy than it consumes and is therefore a net importer of energy. With that comes a political risk, which we see now in our energy dependency on Russia. The EU is looking for ways to cut energy consumption. Rail was already in the spotlight because it is more efficient than other transport modes, but there is also still much to be gained in energy savings”, says Lysne. “The cheapest and most environmentally friendly energy is the energy you do not use.”

An expert in energy metering for rail, Lysne works at Norwegian railway infrastructure manager Bane NOR and Eress. This is an open partnership of European railway infrastructure managers for the measurement and billing of the energy use of trains. It also aims to share knowledge and reduce energy use. More than 130 railway undertakings in Europe are billed through the energy settlement system Erex, and measured journeys have shown savings up 20 to 30 percent.

No longer an estimate

Before energy metering came into being, bills sent to railway firms contained just an estimate. “In some countries it was so bad that the biggest rail operator was just sent the rest of the bill. There was no incentive for using less energy”, says Lysne. The way the detailed energy metering leads to energy savings is by providing an incentive to drive efficiently.

The energy and cost savings involve several aspects, Lysne explains. “One is training for train drivers up front, the other is manual and direct feedback to the driver via the driver advisory system and to the automatic systems. Lastly, transparent settlement systems that ensure that railway undertakings only pay for what they actually use and with the correct market price.”

Eress started with three Scandinavian countries, which were also the first in Europe with a working deregulated commercial energy market. They implemented advanced energy metering on board trains, and in 2007 started with settlement and billing based on these measurements. Eress celebrates its 15th anniversary this year. It has grown steadily since the start up and now counts 9 European partners. Earlier this year, Portugal joined as test partner.

“In Eress we have worked across borders from day one. Since 2007, energy data exchange based on standards has been developed together with the UIC, so that trains that cross borders can also be correctly billed for their energy use“, explains Lysne

The metering equipment that is needed on board trains has been standardised since 2017. There is competition in the offering of metering systems, but they are all interoperable because of regulations. It is up to the railway companies or rolling stock owner to choose one.

The share of trains which have energy metering on board differs greatly in Europe. “In Norway, Sweden and Switzerland, almost 100 percent of trains have an advanced energy meter. However, we are on the tail-end of the transition in Europe as standard energy metering equipment is mandatory for all new or upgraded rolling stock”, says Lysne. “The midpoint has been passed, but there is still much rolling stock to be retrofitted.”

For retrofitting, train owners and vehicle owners that order or lease rolling stock calculate the cost-benefit of installing metering or not, as there are of course costs involved with the metering systems. “We now see more and more that this calculation is clearly showing a benefit, especially with the use of regenerative braking. Before, they didn’t pay back what you recuperated. When a train brakes, the released energy can be captured again. In the Nordic countries, the infrastructure manager buys the regenerated energy from the railway undertakings to market price. This is a strong incentive for energy efficiency.”

However, there are currently certain issues that curb the installation of energy metering on trains, explains Lysne. “Transport and the economy have been hit by the corona crisis, and now the energy crisis comes on top of that. There is still uncertainty about volumes for operators, which is a risk for business.”

Another issue also stems from the COVID-19 pandemic, which hit the global supply chain and production of chips and other components. The delivery of components for electric vehicles has slowed down. This includes the  production and delivery of microchips for example, which are needed for many purposes, including trains and cars. “Delivery times for smart meters have been increasing in the last year. It ranges from 3-4 weeks to 12 months or so and this is a global problem”, says Lysne. Although railway players can be flexible, there are also matters that are outside of their influence that  have an impact.

No starting from scratch

“We have come a long way since 2007 and we have an impressive track record. Eress is organised as an open partnership for railway infrastructure managers. New partners can join Eress and get the same benefits as the existing partners. Together we share knowledge, costs and benefits”, concludes Bjørn Lysne.

At the RailTech Europe conference, there is an entire section about energy on the second day Resilient Rail & Sustainability on 22 June. Bjørn Lysne of Eress talks about the results of energy metering and
incentivising sustainable behaviour, and also Bart van der Spiegel, Energy Management expert at Infrabel, Darren Dang of DB Energy & Etienne Sourdille of SNCF Réseau will give presentations. For the full programme and tickets, visit the website.

1 comment op “Saving energy in rail: ‘The most sustainable energy is the energy you do not use’”

When safely providing quality (On Time) deliveries, as the other on shore, the robust device, then transports now plaguing the high ways sustainably will be transfered to the railways – then railways can claim being, the as well timely, as environmentally friendly device!
(Currently, regrettably, just a minority can afford the luxury of not caring about JIT. For majority now the “last mile device” is the single available alternative, up to a distance of 1000 km from Port…)