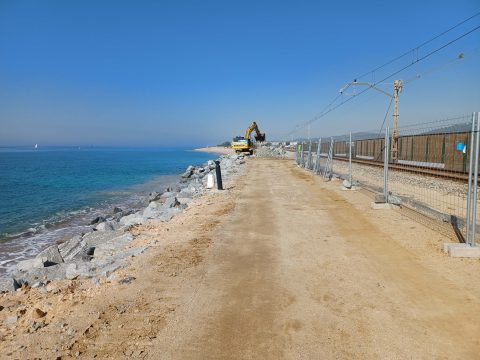 Adif has begun work on the construction of a new breakwater along the Barcelona-Mataró-Maçanet-Massanes line, the famous coastal railway that is at increased risk of extreme weather conditions brought on climate change.

For the next six months, Adif will be reinforcing a 320-metre-section of the railway in the Santa Susanna municipality just outside of Barcelona. The Spanish infrastructure manager will concentrate its efforts on those sections of track closest to the sea. The construction and reinforcement activities first announced on Friday represent an investment of 2,8 million euros. Adif will be installing quarried stones of up to 5,5 tonnes. Two layers of smallers stones of some 250 kilograms each will support the larger stones.

These efforts follow similar works between Mataró and Cabrera de Mar earlier this year. Following several storms in March, during which time waves of up to 3,8 metres in height were registered, part of the breakwater washed away on March 27. This necessitated reinforcement works along 2 kilometres of track, split between 1,2 kilometres in the Mataró area and 800 metres in Cabrera de Mar.

A total of 337,000 tonnes worth of breakwater material was eventually installed. On top of that, more than 30,000 metres worth of micropiles were inserted to ensure the structural integrity of the breakwaters section. These activities came at in investment of 12 million euros, highlighting the increasing costs that climate change represents for the railway sector and society.

First built in 1848, the railway between Barcelona and Mataró is the oldest in Spain. The line is very popular with tourists staying at hotels and campsites along the coast for day trips to Barcelona.

Want to learn more about what the rail sector is doing to become more climate resilient in the face of extreme weather conditions? Join us at RailTech Europe 2022. Day two on 22 June will be devoted to this topic in its entirety. Click here for more information and registration.