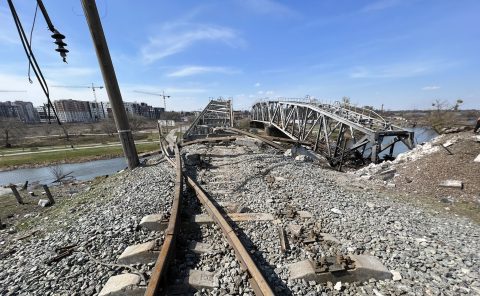 At least 6,300 kilometres of tracks damaged in Ukraine

Since the beginning of Russia’s war against Ukraine, at least 6,300 kilometres of railways and 41 railway bridges have been damaged. The projected costs are least 3,4 billion euros, the KSE Institute of the Kyiv School of Economics estimates.

Like a lot of infrastructure, the railways in Ukraine have taken a big hit. As of May 25, at least 6,300 kilometres of the total 23,000 kilometres of track have been damaged, reports the KSE Institute. The “Russia will pay” project of the analytical department of the KSE Institute of the Kyiv School of Economics collects, analyses and documents information on direct losses to civilian infrastructure in connection with Russian aggression, in collaboration with several Ukrainian ministries, including the Ministry of Infrastructure.

Since the beginning the war, infrastructural damages also include the destruction of at least 23.8 thousand kilometers of roads, 643 healthcare facilities and 1123 educational institutions. As estimated by the Ministry of Economy and KSE, the overall Ukraine’s economic losses due to the war range from 528 billion to 561 billion euros, taking into account all physical infrastructure including buildings. This includes both direct losses calculated in the project and indirect losses such as GDP decline, investment cessation, outflow of labor, additional defense and social support costs.