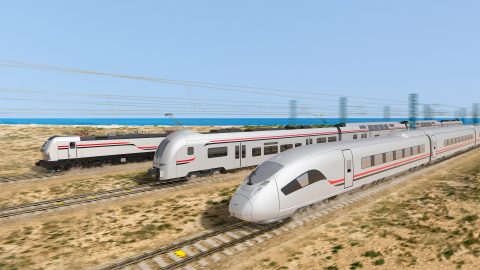 Egypt has finalised the contract with Siemens Mobility for the construction of a three high-speed lines with a length of 2000 kilometres. Including the delivery of high-speed rolling stock and freight locomotives, the total value of the contract amounts to 8.1 billion euros, the biggest order in the history of Siemens AG.

Siemens Mobility and its consortium partners Orascom Construction and The Arab Contractors signed the contract with the Egyptian National Authority for Tunnels (NAT), a governmental authority under the jurisdiction of the Ministry of Transport of Egypt.

The contract was signed by Roland Busch, President and CEO of Siemens AG and Kamel Al Wazir, Minister of Transport Egypt, amongst others. Egyptian President Abdel Fattah El-Sisi was also present, while German Chancellor Olaf Scholz sent a video message, underlining Germany’s support for the project and its importance for German-Egyptian bilateral relations and global climate protection.

“The new electrified train network comes as a consolidation of the fruitful cooperation between Egypt and Germany in the field of infrastructure and will represent a valuable great addition to Egypt’s transportation system, marking the beginning of a new era for the railways system in Egypt, Africa, and the Middle East”, said Egyptian President Abdel Fattah El-Sisi.

The high-speed rail network will connect 60 cities throughout the country, with trains that can operate at up to 230 kilometres per hour. An initial contract of for the first line of 660 kilometres, from the port cities of Ain Sokhna on the Red Sea to Marsa Matrouh and Alexandria on the Mediterranean, was signed on September 1, 2021, worth 2.7 billion euros. This “Suez Canal on tracks” will connect both sea and dry ports and will improve the efficiency of transporting freight.

The second line will be about 1,100 kilometers and connects Cairo and Abu Simbel near the border with Sudan, linking the large city to rising economic centers in the south. Running along the Nile river, it also connects communities up and down the Nile. The third line will cover 225 kilometers, connecting the world heritage archeological sites in Luxor with Hurghada by the Red Sea. In addition, this rail link is expected to greatly improve the efficiency and sustainability of freight transport for goods and materials between Safaga harbor and inland locations.

Siemens Mobility, together with civil works partners Orascom Construction and The Arab Contractors, will provide its turnkey services to design, install, commission, and maintain the entire rail system for 15 years. The construction of the high-speed rail network will directly create up to 40 thousand jobs in Egypt, with an additional 6,700 at Egyptian suppliers and indirectly through the wider Egyptian economy, according to the consortium.

The delivery of trains to run on the brand new tracks is also trusted to Siemens. The company will deliver 41 Velaro eight car high-speed trains, 94 Desiro high-capacity four car regional train sets, and 41 Vectron freight locomotives. On all three lines, Siemens Mobility will install the European Train Control System (ETCS) Level 2, as well as the power supply system that will deliver efficient and continuous energy.

40 Velaro trains in operation along a 2000 km network, i.e. 4000 km for both directions combined, would allow for a spacing between trains of 100 km or, with reasonable assumptions for speed and spares, hourly operations.

I am not sure if Egyptians can afford that, given rising grain prices, as bred should be more important than travelling