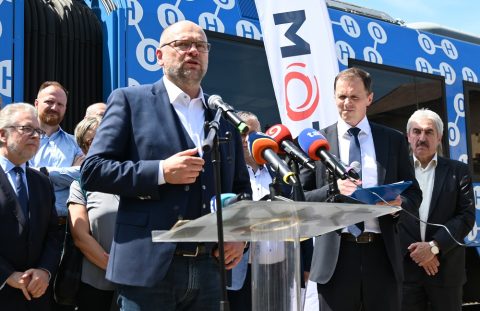 Slovakia’s Economics Minister Richard Sulík believes that a hydrogen train will start running on the Nové Zámky – Prievidza line by the end of this parliamentary term, which runs until 2024. He said this at the Alstom Coradia iLint railshow, which presented the hydrogen train to the country.

Together with Alstom, the French-Slovak Chamber of Commerce organised an event where the Coradia iLint, the world’s first hydrogen-powered passenger train, was showcased in Slovakia on 20 and 21 May. Minister of Economics Sulík recalled at the occasion that last year, the government adopted a national hydrogen strategy that outlined the activities to be supported.

“An action plan will shortly be presented to the interdepartmental commenting process and then to the government, with written concrete activities that we are already launching and want to bring to a successful conclusion. The hydrogen train is one of those activities”, said the Minister.

Huge interest in Slovakia and Czechia

“We can see huge interest in our solution on both the Slovak and Czech markets”, said Dan Kurucz, Alstom CEO for the Czech Republic and Slovakia. The Coradia iLint has been in commercial operation in Germany since 2018 and has also been tested in Austria and the Netherlands. Italy and France have ordered the hydrogen-powered trains. The train has been designed especially for non-electrified routes, so it is an ideal solution for many such stretches in the Czech Republic and Slovakia, said Kurucz.