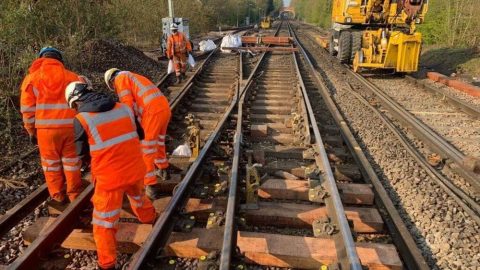 The safety of people who work on the track continues to be a matter of considerable concern, writes the UK Rail Accident Investigation Branch (RAIB) in its latest 2021 annual report, published last week.

Early in 2021, the RAIB commenced their investigation into the death of a track worker at Surbiton and concluded an investigation into the death of a worker who was struck by a train at Roade on the west coast main line in April 2020. In the case of the accident at Roade, it was found that someone was on the track doing a task that was not really necessary. This was also the case for an accident Margam in 2019, which resulted in the death of two track workers.

The RAIB recommends that Network Rail reviews its processes with the aim of minimising the need for track access in connection with operating the electric traction supply system, and hopes that this will help to prevent any more such tragedies.

The way that track maintenance activities are delivered could also be radically changed, by moving away from working on lines that are still open to traffic and reliance on warnings provided by lookouts, so called red zone working. The Office of Rail and Road and Network Rail has made efforts to move in this direction says the report, but without much success, as the RAIB investigations during 2021 showed that the amount of red zone working in fact declined. In ‘close calls’ without fatalities, at Llandegai tunnel and at Eccles, both involved workers believed that they were protected from approaching trains by temporary blockages of the line, which was not the case.

Another point of concern for railway safety in the UK is the response to bad weather, says the RAIB. From the derailment at Carmont, Aberdeenshire, in August 2020 which resulted in the death of three people, it was “apparent that the industry’s arrangements for responding to bad weather were not adequate.”

During 2021, RAIB continued the investigation into the catastrophic derailment and published two reports. The washout that derailed the train at Carmont was caused by incorrect installation of a drainage system eight years before the accident. This accident has served as a stark reminder that extreme rainfall can endanger the drainage systems, earthworks and structures that the railway relies on, and that it is very difficult to predict where and when such failures may occur, says the RAIB.

It is however pleased that Network Rail took action to put in place revised instructions and processes that allow for the slowing down of trains in areas endangered by extreme weather events following the accident.

Data could have prevented accidents

There are numerous examples of where data that provides evidence after a railway accident could, if known about and used to drive action, have been used to avoid the accident happening in the first place, writes Andrew Hall, Chief Inspector of Rail Accidents as a concluding thought. “The data may be there, but the management wherewithal to best use it to reduce risk, is not always. Not recognising this can lead to a false sense of security where having invested in equipment that gathers data, organisations can develop a belief that the risks such data can be used to manage have been mitigated, when they have not.”