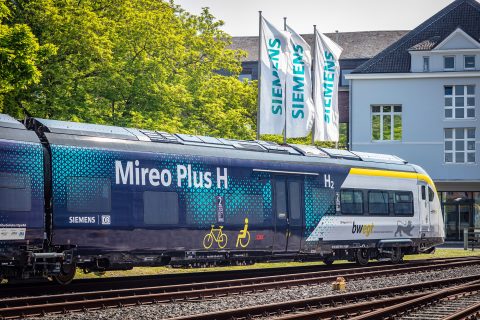 Siemens Mobility and DB gear up for transition to hydrogen trains

Earlier this month, Siemens Mobility rolled out its Mireo plus H hyrdrogen train, throwing its hat into the ring of an increasingly crowded market for trains with alternative traction systems. Together with Deutsche Bahn it is also developing a dedicated hydrogen system for rail. Here’s where things stand.

Hydrogen trains, like mixed-operation pantograph plus battery units, are born from the desire and need to replace diesel-powered vehicles on lines across Europe that are not electrified.

“Electrification requires investment and time. Furthermore, sometimes is it simply not possible – either for practical or economical reasons – to build overhead lines, even in the long-term, Jochen Steinbauer, Platform Director H2 Technologies for Regional Trains at Siemens Mobility recently told RailTech.com. This means there are still around 15,000 diesel trains in operation in Europe today.

Speaking on the train itself, Steinbauer explained that the hydrogen unit rides on the proven Mireo platform, designed to accommodate different traction systems. Siemens Mobility also has a Mireo Plus B(attery). And while the Mireo H(ydrogen) might look conventional, it is anything but.

“In terms of innovation, the train features the HD8 next-generation fuel cell system with a higher power density and an increased efficiency rate”, Steinbauer says. “Our train is ‘only’ about 47 metres long yet we’ve been able to package everything. Also, all subsystems on the train have been harmonised, which should result in lower energy costs and lifecycle costs.”

On top of that, Siemens paid particular attention to the design of the pressure tanks, the piping and the gas handling-unit (GHU), among other things.

The result is a two-car train set that can cover a distance of at least 800 kilometres, which, according to Steinbauer is the typical daily distance covered by regional trains. “This range was a requirement from the market. It means that the trains can be used for an entire day without refuelling.” The three-car version has a range of 1,000 kilometres.

However, a hydrogen train is only as green as the hydrogen you put in. For that reason, Siemens Mobility and Deutsche Bahn are working together as part of the H2goesRail project. The goal of this endeavour is to not only supply green hydrogen but also set up a fast refuelling system and maintenance infrastructure.

“DB wants to be climate neutral in 2040 and hydrogen trains as replacements for diesel-powered units fit with that target. H2goesRail prepares us for this transition”, Marc-Andre Sahba, lead project manager at Deutsche Bahn, says. “These three elements – trains, infrastructure and maintenance – are joined together in a system and that needs to be optimised for operational purposes.”

In a nutshell, DB is using its renewable power for electrolysis to produce green hydrogen directly on site, where it will also be compressed and stored. The storage unit and tank unit are designed in such a way that they can be transported by train or truck, as they have the size and shape of a regular twenty-foot equivalent unit.

The centrepiece of it all, arguably, is the fast refuelling system. Siemens Mobility and DB claim refuelling can now be done at a rate similar to that of regular diesel trains. That is no small feat, as hydrogen has certain unusual properties. For example, hydrogen heats up as pressure drops. This means that the faster you refuel, the more it heats up.

“The rapid refuelling is achieved by an intelligent control and communications interface that keeps temperature and pressures within parameters to get an optimum refuelling process”, Sahba explains, adding that there needs to be some kind of standardisation for refuelling and a common language in terms of communication. After all, DB wants to open its refuelling infrastructure to train sets from other manufacturers as well.

Savings in operational costs to be had

Steinbauer, too, applauds the holistic approach of H2goesRail. “This represents an enormous step in reducing emission-free transportation. Over the lifetime of a Mireo plus H, using green hydrogen, it can result in savings of 45,000 tonnes of CO2 compared to dieseltrains. With CO2 pricing at around 55 euros per ton from 2025 onwards, this means that operators will save a lot of money in operational costs the course of the lifetime of the train.

Two separate testing programmes with the Mireo Plus H are planned for next year, one in Bavaria, the other in the state of Baden-Württemberg. DB will be involved as well in the latter programme. “We need to be ready from day one and that is why we want to be involved in testing of the train from day one”, Sahba explained.

From January 2024 onwards, the two trains will be entered into regular service. In Baden-Württemberg, the hydrogen train will scheduled to run for 120,000 kilometres. 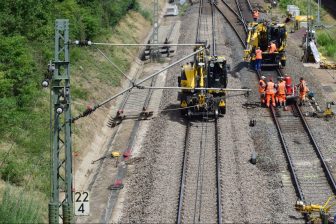