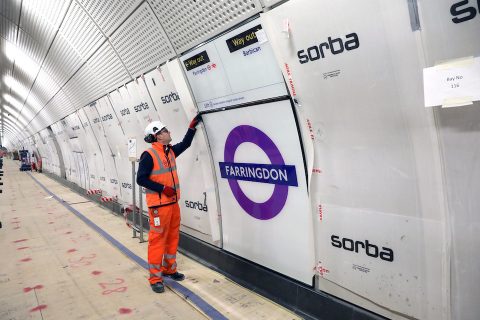 After delay upon delay, London is finally getting its new crossrail service, in less than three weeks from today. On 24 May, the long-awaited Elizabeth Line will begin revenue-earning service beneath the streets of London, taking passengers through the complicated and expensive central tunnel sections. News of the opening was widely anticipated after works ramped up to get the project ready in time for the Queen’s Platinum Jubilee celebrations in June.

The target of opening the Elizabeth Line in time for the seventieth anniversary celebrations of the reign of Queen Elizabeth II has just about been met. The announcement today that the line will open on 24 May, comes as welcome news, albeit there are some loose ends yet to be tied up. The line will be in operation between the main-line stations of Paddington on the edge of the West End, and Liverpool Street in the City. Through trains will run further east into Kent and Essex, but the western services to Reading and Heathrow are not yet ready to be commissioned. One central London station – Bond Street – will not be ready for the opening.

It has been a long and protracted project, but finally engineers can put their tongues in their collective cheeks and say there is light at the end of the tunnels. Later this month – around four years late and four billion pounds (four and a half billion euro) over budget – the stylish purple-liveried Bombardier Aventra electric trains will dive under the streets of London, carrying up to 1500 passengers for the very first time. Well, almost. The trains have actually been operating on the surface, out of Paddington and Liverpool Street stations, since 2019, originally disguised as “London Overground” services.

All services between Reading (40 miles, 64km west of London) and Heathrow to Paddington and between Shenfield (25 miles, 40 km north east) to Liverpool Street, currently operating as TfL Rail, will be rebranded to the Elizabeth Line. However, passengers travelling between Reading or Heathrow into London will need to change at Paddington for services into the central section of the route, and customers from Shenfield into London will need to change at Liverpool Street. Services from Reading, Heathrow and Shenfield will connect with the central tunnels in autumn when frequencies will also be increased to as many as 22 trains per hour in the central tunnel section between Paddington and Whitechapel. Very convenient for the famous street market and Brick Lane, but that may not have been the primary reason for the project.

A new standard for … expense

Transport for London (TfL) – the relevant authority in London under the administration of the Mayor – is unsurprisingly upbeat about the announcement. “The opening day is set to be a truly historic moment for the capital and the UK”, said their commissioner Andy Byford. “We look forward to showcasing a simply stunning addition to our network.”

Stunning it unquestionably is. The stations on the central section of the line are among the biggest underground structures in country – and certainly set a new standard for space and efficiency beneath the city streets of London. The whole project also sets an unwanted new standard for expense, at 18.8 billion pounds (22.3 billion euro) making HS2, mile for mile, seem like an underfunded rural branch line (which, to many Londoners, it is).

Canary Wharf to takeoff via one train

Operationally, it is important to point out that the Elizabeth Line may be a sub-surface railway beneath London, but it is not a part of London Underground – commonly known as the tube – a fact that still catches out reporters in the UK. The Elizabeth Line, as the Crossrail project is branded, is a part of the national rail network, and connects with surface services in a way that has never before been possible.

The central tunnel section – build to a loading gauge much more generous than any of the Tube lines – directly connects to suburban and regional lines that previously terminated at Liverpool Street on the eastern edge of the financial district. When works are completed in about one year, the western end of the line will join to services emanating from Paddington Station – making destinations like Heathrow and Reading directly accessible from locations in Kent, Essex, and critically the business centres of Canary Wharf and the City of London.

Elizabeth’s own station not ready

Despite operating independently, the Elizabeth Line is well connected to the London Underground system. Even so, the route avoids direct intersection with the suite of terminus stations on the north edge of central London. There is no Elizabeth Line station at Marylebone or King’s Cross; nor the Eurostar terminal at St Pancras, or HS2 at Euston. However, the stations on the central section of Crossrail all connect with between two and six other TfL lines. Several city bus routes are being altered to align with the new service.

One station will not be open in time for 24 May. Work is ongoing at Bond Street Elizabeth Line station, which has been subject to extensive complications during excavation and construction. “The station continues to make good progress”, said a short statement from TfL. “The team at Bond Street are working hard to open the station to customers later this year.” It may be noted that Bond Street will be the ‘local station’ for Buckingham Palace. One’s great-great grandmother may not be amused.

Please explain the contradiction between

“passengers travelling between Reading or Heathrow into London will need to change at Paddington for services into the central section of the route”!?