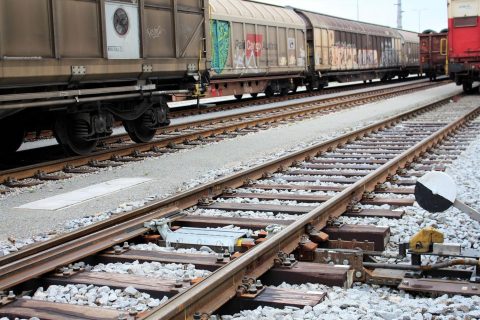 Railway sabotage after 50 days of war in Ukraine: here is what we know

There have been reports of alleged railway sabotage to hinder the movements of Russian goods, equipment and troops into the field of battle in Ukraine for months. What reports of sabotage have there been so far? Here’s what we know at day 50 of the war in Ukraine.

Earlier this week, a key Russian railway bridge in the Belgorod region at some 6,5 kilometres from the border with Ukraine suffered extensive damage following a possible act of sabotage. Images of the bridge shared online show the tracks have been forced upwards, possibly due to an explosion.

On Friday, Belarusian media reported that local resistance groups had claimed responsibility for acts of sabotage in the Smolensk and Bryansk regions of Belarus.

It was the latest in a long line of incidents that actually stretches back all the way to January, when cyber-activists hacked Belarusian Railways and destroyed the databases that the company uses control traffic. Shortly after the Russian invasion of Ukraine on February 24, the so-called Belarusian Cyber Partisans staged another attack on Belarusian Railways.

Once the conflict got underway, the Cyber Partisans were joined by Belarusian Railway employees staging acts of sabotage. Their method of choice appears to have been setting fire to relay cabinets. In March, the Belarusian section of the Gomel-Chernihiv-Kyiv railway out of service, which was attributed to Belarusian railway workers.

Shortly thereafter, Belarusian special forces started guard duties along key railways into Ukraine. While information is hard to come by, it appears that 40 to 80 railway workers have been apprehended over the past weeks. Estimates regarding the number of acts of sabotage carried out vary, but the consensus seems to be that there have been more than 80. That number also includes the very basics acts, such as placing objects on the tracks or starting fires.

Belarus, in fact, has a long history with railway sabotage. When the Soviet Union set about attacking the supply lines of the invading German forces in the summer of 1943, the railways where their primary target. According to historian Phillip W. Blood, more than 20,000 attacks were carried out in august 1943 alone, the majority of which in present-day Belarus.