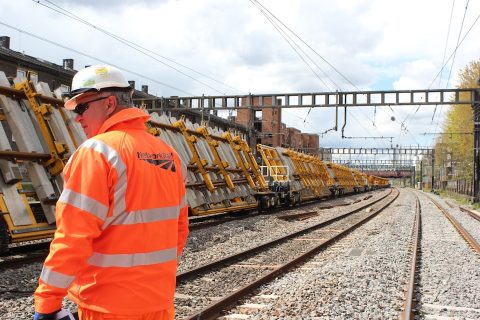 It is one of the busiest engineering programmes ever on the UK rail network. The traditional Easter holiday – a four-day period from Friday to Monday – is always used to make running repairs all over the network. This year is among the most comprehensive ever, despite changed pattern of demand making peak leisure periods potentially more important for operators.

Highest profile of all are the closures in London of Victoria station serving destinations in the south of England, and Euston terminal, which handles all West Coast Main Line traffic from cities such as Birmingham, Manchester, Liverpool and Glasgow.

It is not just the time set aside for engineering works, the Easter weekend is, this year, the weekend of some of the biggest sporting fixtures in the UK. This year it coincides with the semi-finals of both the English and Scottish Cup competitions. The draw has paired Liverpool FC and Manchester City, whose fans will have to find alternative routes to Wembley in London. In Scotland, the big Edinburgh clubs, Hearts and Hibernian, are also meeting in a semi-final in Glasgow, with many tens of thousands relying on rail to reach Hampden Park.

This Easter, the infrastructure agency Network Rail is carrying out upgrades all over the network. With the religious observance falling later this year, daylight and weather conditions are better, making it easier for project managers to plan for extensive works. Among the highest profile works is a programme of projects planned for the West Coast Main Line (WCML), which will close significant parts of that route, including its London terminus at Euston.

Passengers have been advised by Network Rail to avoid the Easter bank holiday, which Network Rail has defined as Thursday 14 April and Tuesday 19 April – a rather longer break than most workers will enjoy. All WCML services will start and finish at Milton Keynes, with alternative replacement buses provided for the remaining 50 miles (80km). Between Good Friday (15 April) and Easter Monday (18 April), Euston station will be closed to main line train services due to major track upgrades in Watford, just outside north west London, including work to build what is now being called ‘Britain’s new zero-carbon railway HS2’.

Network Rail has emphasised that in addition to the works around London, there is a whole programme of other essential work underway which requires the WCML to be closed. These include drainage work at Beechwood Tunnel, bridge renewal works and track works all around Coventry; and signalling and track improvements on lines around Crewe station and at Carnforth; and infrastructure replacement at Carstairs in Scotland.

“There is never an ideal time to shut the railway and we have to carefully balance the best time to do this essential work with the needs of our passengers”, said Dave Penney, Network Rail passenger director for the North West and Central region. “Long holiday weekends continue to give our engineers the time they need to close the railway for complex jobs like track replacements and bridge overhauls while disrupting the fewest number of people.”

However, this year’s programme of works has hit the headlines because of the luck of the draw – literally. The planned programme of railway improvements coincide with the FA Cup semi finals at Wembley stadium. With Liverpool and Manchester City playing their semi-final match this saturday, football fans have been scrambling to make alternative travel arrangements. The other semi final – also being played at Wembley – involves two London clubs, so travel issues are not so acute for fans of Chelsea and Crystal Palace.

Fans in Scotland can expect a slightly easier time of it, making their way to this weekend’s semi-final ties. Although there is some work around Glasgow’s suburban network, trains are running between Edinburgh and Glasgow. That’s good news for fans of Hearts and Hibernian. The two Edinburgh clubs meet at the national stadium – Hampden Park in Glasgow on Saturday. Glasgow rivals Celtic and Rangers meet on Sunday for the right to face the winners of that tie.

Network Rail has an even bigger programme of works planned for the public holiday weekend of 30 April and 2 May. Football fans can note that if their team makes it to the final, their journey should be a smooth one. Not only will the rails be renewed, the finals in England on Saturday 14 May, and a week later in Scotland, should be free from engineering works.