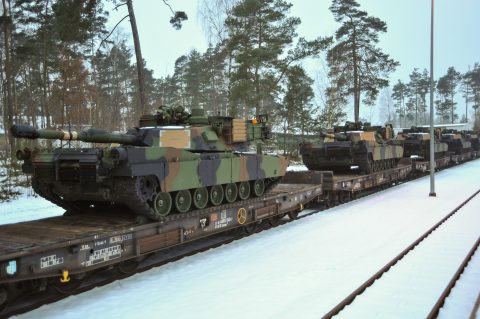 To improve infrastructure for military and civilian purposes, the EU has selected 22 projects and grants 339 million euros from the Military Mobility fund in the first round, having accelerated the approval in face of the Russian invasion in Ukraine. Around 160 million euros will go to railways, mainly to allow for the circulation of larger and heavier trains.

The goal of the funding is to develop infrastructure adapted to jointly improve civil and defence mobility within the EU, making it ‘dual-use compatible’, not only for regular transport but also for moving heavy military equipment.  “Against the background of Russian aggression, it is very clear how important it has been to decide on a separate measure for military mobility projects, and I hope that all Member States will use it as effectively as possible to increase European capabilities”, said Henrik Hololei, Director General of the European Commission’s Directorate-General for Mobility and Transport.

The fund has the goal to increase capacity at railways, maritime ports, airports and roads. It is part of the Connecting Europe Facility, which aims to fill the missing links in Europe’s energy, transport and digital backbone. Twelve out of the first 22 selected projects include improvements to railway infrastructure in Germany, Finland, Estonia, Latvia, Lithuania, Belgium, Italy, France, Portugal, Slovenia and Hungary.

Of the railway projects, the German Transport ministry will receive the largest amount of almost 50 million euros. The infrastructure on the North Sea-Baltic Corridor will be upgraded to be able to accommodate to 740-metre long freight trains for civilian and military purposes. Most freight trains in Europe are currently closer to 600 metres, and the infrastructure at for example stations can often not yet accommodate to these longer trains.

The Belgian railway manager Infrabel will receive around 5 million euros for the construction of 4 long tracks in the Bundle of Montzen to accommodate 740-metre long trains between the Port of Antwerp and the German Border. Italian railway infrastructure manager RFI will receive nearly 4 million to upgrade Pontedera and Palmanova stations to handle longer freight trains.

The Portuguese port administration of Aveiro will receive around 7,5 million for an intermodal terminal and rail extensions. The Slovenian port of Koper is to receive 20 million euros for improving maritime and land accessibility between the TEN-T core network and the port of Koper, also including rail accessibility. Hungary will receive 3 million euros for the adaptation of TEN-T railway stations in Western Hungary to civilian and military use, and French railway manager SNCF Réseau will receive 5,5 million for the clearance of the military and civil gauge in the Mussuguet tunnel.

Finnish Transport Infrastructure Agency Väylävirasto will receive nearly 15 million euros for the development of the rail traffic, which includes the electrification of Laurila–Tornio–Haparanda railway, and 7 million for improving the Oritkari triangular junction.

Improving infrastructure in the Baltics

The Baltic states, which all share a border with Russia, are also improving their infrastructure with the purpose of improving military mobility. Of the three, the largest amount goes to Estonia, where the Estonian Centre for Defence Investment will receive 31 million for improving the connection to Estonia’s largest military base in Tapa. Part of the plans are to upgrade the railway infrastructure between Palupera-Puka and Puka-Keeni stations, This will “increase the quality of infrastructure on these railway sections, the speed of trains and, if necessary, support greater use of rail for military logistics”, says Kaido Zimmermann, Chairman of Estonian railway manager Eesti Raudtee.

Lithuanian railway manager LTG Infra receives around 13 million to improve the loading facility in Palemonas. The Latvian transport ministry is to receive around 5 million for the integration of the military mobility requirements in the Latvian part of the Rail Baltica Project, a new railway connecting the three countries.

The CEF call for Military Mobility closed in January, and EU Member States approved the first 22 projects on 7 April. The Commission will adopt formal financing decisions in the coming weeks and the grant agreements with the implementers of the projects are being prepared. The next Military Mobility call will be launched in May 2022, which was brought forward being originally planned for later this year.