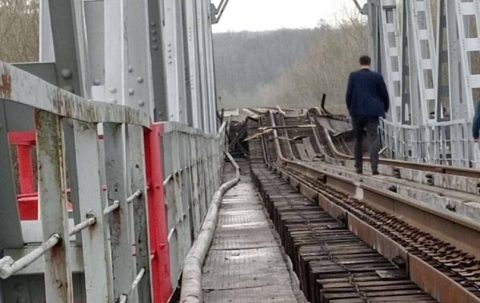 A key Russian railway bridge in the Belgorod region near the border with Ukraine has suffered extensive damage following a possible act of sabotage. The Russian authorities have confirmed the destruction of the tracks, various news outlets including the Guardian and Newsweek reported. The Ukrainian side has yet to comment on the matter.

Images of the bridge shared online show the tracks have been forced upwards, possibly due to an explosion. The bridge is part of key Russian railway line and situated only 6,5 kilometres from the border with Ukraine’s Donbas region, where Russian forces are widely expected to be planning their next major assault.

In preparation for the attacks, Russia has begun militarising several border regions, including Belgorod. This means military check points and the digging of trenches. According to Maj. Gen. Kyrylo Budanov, the head of Ukraine’s military intelligence, these efforts are part of a so-called false flag campaign aimed at creating panic among Russians about “an imaginary attack of Ukrainian volunteer battalions and diversion groups”.

The railways have acted as important supply lines for both sides in the conflict. Last month, railway workers in Belarus carried out several acts of sabotage to hinder the movement of Russian troops and equipment into northern Ukraine. Russian forces have since pulled out of the area to focus their attention on the Donbas region.