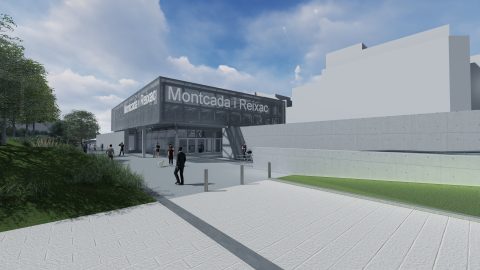 Raquel Sánchez Jiménez, the Spanish minister of transportation, earlier this week unveiled plans for an overhaul of the railway network in Vallès Occidental country, just outside Barcelona. The plans call for a new train station and a 4-kilometre railway tunnel.

The plans were presented in the Montcada i Reixac municipality, one of Barcelona’s suburbs, where an underground new train station is to be constructed. The centrepiece of the works is a 4-kilometre railway tunnel for the Barcelona-Portbou line.

The tunnel will start in Montcada’s Can Sant Joan neighbourhood from where it will run in the direction of the new Montcada i Reixac station, which will be built in close proximity to the existing structure, before crossing underneath the Ripoli riverbed and the C33 highway. The tunnel will reach a maximum depth of 35 metres. It has been designed in such a way that trains can reach 140 kilometres per hour.

At the underground station, the only outer-two tracks will have a platform, leaving the middle track available for train services with fewer stops. The works also eliminate two above-ground level crossings, making traffic safer whilst at the same time freeing up space.

The works, valued at some 465 million euros, are currently in the bidding stage.