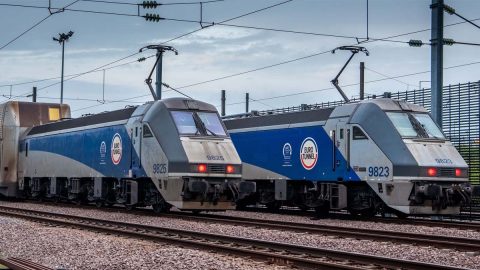 Freight and passenger traffic came to a standstill in the Channel Tunnel and at the busiest cross-channel port of Dover on Monday. A stopped train under the waves combined with a lack of ferry services on the waves, left freight and passengers stranded. Tuesday morning, the passenger shuttle service operates as normal again.

A Eurotunnel Le Shuttle train breakdown under the English Channel blocked the Channel Tunnel temporarily in the early hours of Monday morning. Although the train was revived and cleared relatively quickly, the resultant backlog caused delays of five hours or more for all services. The problems were made more intense by multiple ferries being out of service from Dover. Both P&O and DFDS were affected, leaving trucks with limited alternatives and many passengers heavily delayed.

Problems began at Dover over a week ago, when ferry operator P&O was forced to withdraw services. The company had recently made highly controversial staff changes – by making existing crews redundant and replacing them with cheaper agency staff. That move caused outrage in the UK, but the matter reached new depths when the maritime agencies withdrew permissions for vessels to sail, because of safety regulation concerns.

Rival ferry operator DFDS, which also operates out of Dover, has suffered technical problems with its own fleet, putting severe pressure on the port at Dover. Customers, especially freight truckers, would normally seek to divert via the freight shuttle service operated by Eurotunnel. However that service came to a grinding halt on Monday morning.

Would-be customers were met with a terse tweet from Eurotunnel. “Due to a train stopped temporarily in the tunnel, our service is currently experiencing delays. Please check-in as planned. Apologies for this”, they said. Meanwhile many of those customers took to social media to express frustration, but also to help inform their fellow travellers of the situation.

The UK government responded by reorganising the freight transit documentation arrangements, which have been in force since Brexit and recently updated. “Due to ongoing issues with the goods vehicle movement service, we have put interim measures in place until midday, Thursday 7 April 2022”, said their statement. Government sources also said they would provide an update by that time.

When traffic at Dover exceeds capacity at the port, the local police force co-ordinate a familiar and well tried procedure called “Operation Stack”. To relieve the jam, commercial vehicles are backed up on the highway approaches to the coast. It’s unusual for the same system to be required at Folkestone, the UK terminal of the Channel Tunnel. Nonetheless, there were considerable delays – reportedly up to five hours – at the height of the congestion

Although still under used in terms of capacity, the Tunnel has been attracting new flows lately. Silk Road intermodal traffic has been more frequent of late, and Toyota recently became a regular customer with finished cars travelling between French and UK distribution sites.

By midnight on Monday Eurotunnel Le Shuttle Freight was reporting business as normal and four departures in each direction per hour.