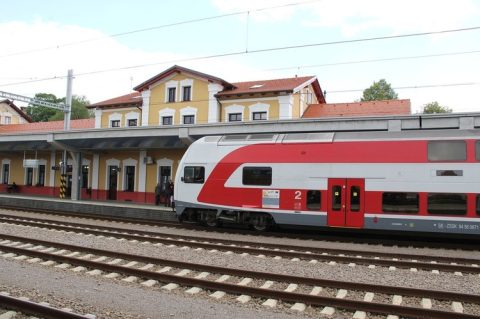 Slovak transport minister: ‘we need to get rail in a much better condition than it is today’

Slovak infrastructure manager ŽSR signed contracts with contractors for six new railway projects at the Ministry of Transport last week, which should give the railways a boost. It includes three modernisations, including the Bratislava railway tunnel, a railway reconstruction to enable increasing the speed of trains and two new railway stations.

“These projects are proof that we are serious about rail transport. We need to get it into a much better condition than it is today”, said Transport Minister Andrej Doležal at the signing of the contracts.

The Bratislava railway tunnel, the line Boleráz – Smolenice and the switches in Dvory nad Žitavou will be modernised. The railway line between Trnovec nad Váhom and Tvrdošovce will undergo extensive reconstruction of the track in the length of 9.57 kilometres, which enables an increase of the line speed to 140 kilometres per hour. Two railway stations, in Lamačská Brána and Vrakuňa will be under construction for a smooth transfer between the train and public transport.

“If we want people to use public transport more, we have to provide them with the maximum possible comfort. That is why we are embarking on building more integrated passenger stations, which are stops where you can easily switch from a train to a tram or a bus”, said the transport minister.

The 6 projects will be financed from the still running EU funding. “We believe that we will be equally successful in the next period and also in drawing on the Recovery and Resilience Fund from the EU to improve the infrastructure for both passengers and carriers”, said Miloslav Havrila, Director General of ŽSR.